Tunisia has now offered evidence of human activity dated to nearly 100,000 years ago(d) at a site near Tozeur, in the southwest of the country, where the chotts are today.

Tunisia was proposed in the 1920s, by Albert Herrmann, as holding the location of Plato’s Atlantis, at a dried-up saltwater lake known today as Chott el Djerid and was, according to Herrmann, previously called Lake Tritonis. Around this same period Dr. Paul Borchardt, a German 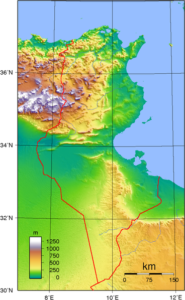 >Hong-Quan Zhang has a Ph.D. in Fluid Mechanics and lectures at Tulsa University. He is a recent supporter of Atlantis being located in the chotts of Tunisia and Algeria.(l) He offers his interpretation of excerpts from the ancient Pyramid Texts in support of his contention.(m) <

More recently, Alberto Arecchi developed a theory that places Atlantis off the present Tunisian coast with a large inland sea, today’s chotts, which he identifies as the original ‘Atlantic Sea’, straddling what is now the Tunisian Algerian border. Arecchi claims that this was nearly entirely emptied into the Mediterranean as a result of seismic or tectonic activity in the distant past.

In 2018, Charles A. Rogers published a paper(f) on the academia.edu website in which he identified Tunisia as Atlantis with its capital located at the mouth of the Triton River on the Gulf of Gabes. He favours Plato’s 9.000 ‘years’ to have been lunar cycles, bringing the destruction of Atlantis into the middle of the second millennium BC and coinciding with the eruption of Thera which created a tsunami that ran across the Mediterranean destroying the city with the run-up and its subsequent backwash. This partly agrees with my conclusions in Joining the Dots!

There is clear evidence(b) that Tunisia had been home to the last wild elephants in the Mediterranean region until the demise of the Roman Empire. Furthermore, North Africa and Tunisia in particular have been considered the breadbasket of imperial Rome supplying much of its wheat and olive oil. In particular the Majardah (Medjerda) River valley has remained to this day the richest grain-producing region of Tunisia(i). Roman Carthage became the second city of the western empire. Although the climate has deteriorated somewhat since then, it is still possible to produce two crops a year in low-lying irrigated plains of Tunisia. Furthermore, around the mountains of northwest Africa, there is an abundance of trees including Aleppo pine forests that cover over 10,000 km2 (h). All these details echo Plato’s description of Atlantis and justify consideration of Tunisia as being at least part of the Atlantean confederation.

It is worth noting that Mago, was the Carthaginian author of a 28-volume work on the agricultural practices of North Africa. After the destruction of Carthage in 146 BC, his books were brought to Rome, where they were translated from Punic into Latin and Greek and were widely quoted thereafter. Unfortunately, the original texts did not survive, so today we only have a few fragments quoted by later writers. Clearly, Mago’s work was a reflection of a highly developed agricultural society in that region, a description that could also be applied to Plato’s Atlantis!

In 2017, the sunken city of Neapolis was located off the coast of Nabeul, southeast of Tunis. This city was reportedly submerged by a tsunami ”on July 21 in 365 AD that badly damaged Alexandria in Egypt and the Greek island of Crete, as recorded by historian Ammianus Marcellinus.(e)(g)” However, water from a tsunami eventually drains back into the sea, but the demise of Neapolis might be better explained by liquefaction, in the same way, that Herakleion(j), near Alexandria, was destroyed, possibly by the same event. Neapolis and Herakleion are around 1,900 km apart, which suggests an astounding seismic event if both were destroyed at the same time!(e)

In November 2021, Aleksa Vu?kovi? published an article on the Ancient Origins website reviewing the current evidence for a Tunisian location for Plato’s Atlantis. Unfortunately, nothing new is offered that you cannot find here(k)!

To be clear, I consider parts of Tunisia to have been an important element in the Atlantean alliance, which according to Plato, also included southern Italy along with some of the Mediterranean islands (Tim.25a-b).

(k) The Theory of the Tunisian Atlantis – Beneath the Sands of Africa! | Ancient Origins (ancie*nt-origins.net)

Albert Herrmann (1886-1945) was Professor of Geography at Berlin University. He was very interested in oriental geography and is perhaps best known for his 1935, Historical and Commercial Atlas of China, which was widely used

His other passion was Atlantis, so between 1927 and 1931 he declared support for Borchardt’s northwest Africa location theory in a number of publications. In 1938 he used is influence to mount a large exhibition in Berlin about Atlantis(a).

He agreed that a large dried-up saltwater lake in Tunisia called Shott el Djerid was originally Lake Tritonis and was known during Solon’s time as the ‘Atlantic Sea’ and further claimed that it had been the location of Atlantis; a theory supported by a number of investigators. In more recent times, Charles A. Rogers is one such advocate of this identification(b).

Herrmann suggested that it was the result of an upheaval of the land, which extended a land barrier between the Shott and the sea. He locates the Pillars of Heracles where this barrier was created. Anton Mifsud has pointed out that the 1st century BC writer Apollonius Rhodius located the Strait of Heracles in ancient Syrtis Minor, now the Gulf of Gabés, apparently supporting Herrmann’s contention. At one point, Herrmann cited as Atlantis, the village of Rhelissa, near the mouth of the old River Tritonis, which flowed into the Gulf of Gabes.

Herrmann disagreed with Plato’s 9,000 years and proposed that he had instead been referring to the 13th or 14th century BC.

Finally, Herrmann, in an effort to match this location with the Platonic narrative, felt obliged to reduce its dimensions by a factor of thirty. He claimed that the priest or interpreter at Sais had erred in the conversion of the Egyptian ‘schoinos’ into Greek stadia. The schoinos was adopted by the Greeks, where it must be noted that it, as well as the Geek stadion, had variable regional values; the number of schoeni per stadion varied between 30 and 120.

In a later book[386], Herrmann shifted his view from his original stance suggesting that Tunisia had been just a colony under the influence of a culture originating in Friesland, later to become famous as the source of the Oera Linda Book (c). It is not impossible that the introduction of a Northern European slant to his theories was the consequence of political pressure in Germany at the time, typified by Borchardt being imprisoned because of his Jewish background. Vidal-Naquet describes Herrmann as ‘an avowed Nazi’ [580.121] so pressure may not have been necessary. (a) >His revised conclusions appear to mirror the views of fellow nazi Hermann Wirth.<