O.A.W. Dilkie (1915-1993) was an English classical scholar and the author of a well-regarded paper Greek and Roman Maps [1753]. The BBC offered an overview of the development of cartography since the 15th century(k).

The subject entered the Atlantis arena in 1665 with the publication of a speculative map(a) of Atlantis, situated in the Atlantic, by Athanasius Kircher. It was allegedly based on earlier Egyptian maps, but unfortunately, there has been no corroborative evidence to support this contention. Kircher’s map had been used to bolster a variety of location theories – Azores, Russia, Baffin Bay and Greenland, Kircher himself favoured the Azores.

However, on some 15th-century maps, the islands of the Azores appear as Isola de Brazil, or Insulla de Brazil. Apparently, it was not until as late as 1865 that Hy-Brasil was finally removed from official naval charts.

Another feature on ancient that can confuse is the placing of the south at the top of old charts, two examples of which are Kircher’s map of Atlantis and Al-Idrisi’s Tabula Rogeriana. Caroline Williams has an interesting article(e) on the BBC website relating to the history of map orientation. 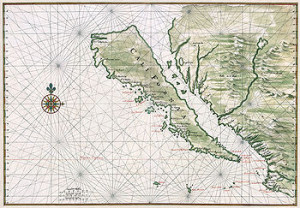 The unreliability of early maps is highlighted by the manner in which California has been depicted. In the 16th century, the maps of both Mercator and Ortelius correctly show Baja California as a peninsula, but in the following 17th and 18th centuries, it became an island on many charts despite written evidence to the contrary. There is a website dedicated to a study of the ‘island of California’(I), which incongruously ends with a brief reference to Atlantis, placing it in the Atlantic in the Region of Bermuda.

Donald S. Johnson in his well-illustrated Phantom Islands of the Atlantic[0652] discusses in detail the history of seven legendary islands. This fascinating book offers every reason to treat the details of early cartography with extreme caution.

The most widely referred to map in relation to Atlantis as well as advanced ancient civilisations is the Piri Reis chart. This arguably depicts an ice-free Antarctica and has been used to develop the idea that Atlantis had been located there and was destroyed when a sudden pole shift caused the southern icecap to move to its present position. Rose and Rand Flem-Ath are the leading proponents of this idea based on the findings of Charles Hapgood. Other maps such as that of Phillipe Buache, the renowned French geographer, published in 1737, are claimed to show an ice-free Antarctica.

Dale Drinnon had an interesting if speculative, article on ancient maps and their possible relevance to the story of Atlantis(b).  Another article in Atlantis Rising magazine (July/August 2014) argues that the quality of medieval navigational charts (portolans) of the Mediterranean exceeded the capabilities of the instruments and knowledge in the region at that time and must have originated elsewhere. However, Roel Nicolai at Holland’s Utrecht University, who expressed these sentiments, was unwilling to nominate Atlantis as the source of the maps(c).

(h) Why Ancient Mapmakers Were Terrified of Blank Spaces (archive.org) *