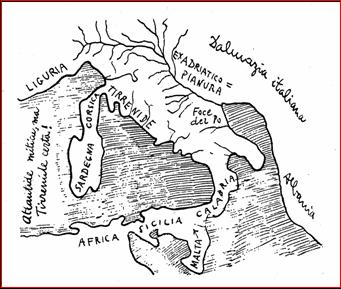 Tirrenide is the name given to a large landmass that was supposedly submerged off the west coast of Italy, which subsequently gave its name to the Tyrrhenian Sea. Some of these ideas were proposed in 1840 by Angelo Mazzoldi in Delle Origini Italiche who also placed Atlantis in this ancient Italy.

The name ‘Tirrinide’ was first proposed by C.J. Forsyth Major in 1882.

Some commentators, such as Pier Paolo Cavallin(e) [1049] and Evelino Leonardi, have tried to link the story with Atlantis. Leonardi’s contribution to the belief that there was an Italian Atlantis is explored in depth by Marco Pucciarni(d). Von Klaproth speculated that it had been a vast island that filled most of the Western Mediterranean. Others suggest the vicinity of Calabria or part of a landbridge between Italy and North Africa.

The legend of Tirrenide is frequently linked with the island of Sardinia (along with Corsica). This is the view of Leonardo Melis who considers his Tirrenide to have been a rival empire of Atlantis(c).

Constantino Cattoi expressed some odd views involving an extension of Atlantis reaching into the Mediterranean as far as Italy and added that just offshore from Ansedonia, 70 miles north of Rome may have been the location of the Atlantean capital! This concept has now been adopted by Francesco Palambo.

A more recent view of Tirrenide at the end of the last Ice Age is available online(a).

Evelino Leonardi (1871-1939) was a Roman doctor and amateur archaeologist who was convinced that Atlantis had been located in Italy with their cyclopean remnants visible on Monte Circeo on the west coast of Italy, south of Rome.

He published his ideas[438] in 1937, among which he claimed that Lake Tritonis had been situated in Italy adjacent to the Tyrrhenian Sea and that the mythical Tirrenide was also situated there. To say the least, this was an innovative idea, as it was generally accepted that Lake Tritonis had been located in North Africa. Leonardi also contended that the survivors of the demise of Atlantis migrated to Egypt.

However, in recent years interest in Leonardi’s work has been revived. The late Gianluigi Proia has written a number of articles on the circei.it website in support of Leonardi’s theories. One of the most comprehensive of these(a), although published in Italian, translates adequately with Google.>Leonardi’s contribution to the belief that there was an Italian Atlantis is explored in depth in a paper by Marco Pucciarni(b).<