Italy seems to have an uncertain etymology; Thucydides claims that Italos, the Sicilian king gave his name to Italy, while more recently Emilio Spedicato(h) considers that ”the best derivation we believe to be the one proposed by the Italian nuclear engineer Felice Vinci (1998), in his monograph claiming a Baltic setting for the Homeric epic: he derives Italia from the rare Greek word aithalia, meaning the smoking one.” This is thought to be a reference to Italy’s many volcanoes.

Italy today is comprised of territory south of the Alps on mainland Europe including a very large boot-shaped peninsula, plus Sicily, Sardinia and some smaller island groups, which along with the French island of Corsica virtually enclose the Tyrrhenian Sea.

The earliest proposal that Italy could be linked with Atlantis came from Angelo Mazzoldi in 1840 when he claimed that before Etruria, Italy had been home to Atlantis and dated its demise to 1986 BC. Mazzoldi expressed a form of hyperdiffusion that had his Italian Atlantis as the mother-culture which seeded the great civilisations of the eastern Mediterranean region(b).

Some of Mazzoldi’s views regarding ancient Italy were expanded on by later scholars such Camillo Ravioli, Ciro Nispi-Landi, Evelino Leonardi, Costantine Cattoi, Guido DiNardo and Giuseppe Brex. Ravioli sought to associate the Maltese island of Gozo with his proposed Atlantis in Italy.

The Italian region of Lazio, which includes Rome, has had a number of very ancient structures proposed as Atlantean; Monte Circeo (Leonardi), Arpino(a) (Cassaro). Another aspect of Italian prehistory is the story of Tirrenide, which was described as a westward extension of the Italian landmass into the Tyrhennian Sea during the last Ice Age, with a land bridge to a conjoined Sardinia and Corsica.. At the same time there were land links to Sicily and Malta, which were all destroyed as deglaciation took place and sea levels rose. 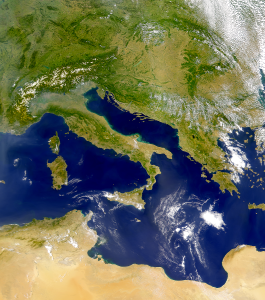 It is surprising that so few researchers have commented on Italy’s part in Plato’s Atlantis narrative considering that he twice, without any ambiguity, informs us that the Atlantean domain extended as far as Tyrrhenia (modern Tuscany).

Crit.114c. So all these, themselves and their descendants, dwelt for many generations bearing rule over many other islands throughout the sea, and holding sway besides, as was previously stated, over the Mediterranean peoples as far as Egypt and Tuscany.    Tim.25a/b. Now in this island of Atlantis there existed a confederation of kings, of great and marvellous power, which held sway over all the island, and over many other islands also and parts of the continent; and, moreover, of the lands here within the Straits they ruled over Libya as far as Egypt, and over Europe as far as Tuscany. (Bury)

The quotation from Timaeus is most interesting because of its reference to a ‘continent’. Some have understandably but incorrectly claimed that this is a reference to America or Antarctica, when quite clearly it refers to southern Italy as part of the continent of Europe. Moreover, Herodotus is quite clear (4.42) that the ancient Greeks knew of only three continents, Europe, Asia and Libya.

Philo of Alexandria (20 BC-50 AD) in his On the Eternity of the World(g) wrote “Are you ignorant of the celebrated account which is given of that most sacred Sicilian strait, which in old times joined Sicily to the continent of Italy?” (v.139). The name ‘Italy’ was normally used in ancient times to describe the southern part of the peninsula(e). Some commentators think that Philo was quoting Theophrastus, Aristotle’s successor. This would push the custom of referring to Italy as a ‘continent’ back near to the time of Plato. More recently, Armin Wolf, the German historian, when writing about Scheria relates(f) that “Even today, when people from Sicily go to Calabria (southern Italy) they say they are going to the ‘continente’.” This continuing usage is further confirmed by a current travel site(d) and by author, Robert Fox[1168.141]. I suggest that Plato used the term in a similar fashion and can be seen as offering the most rational explanation for the use of the word ‘continent’ in Timaeus 25a.

When you consider that close to Italy are located the large islands of Sicily, Sardinia and Corsica, as well as smaller archipelagos such as the Egadi, Lipari and Maltese groups, the idea of Atlantis in the Central Mediterranean can be seen as highly compatible with Plato’s description.

If we accept that Plato stated unambiguously that the domain of Atlantis included at least part of southern Italy and also declared that Atlantis attacked from beyond the Pillars of Heracles, then this appellation could not be applied at that time to any location in the vicinity of the Strait of Gibraltar, but must have been further east, probably not too far from Atlantean Italy. This matches earlier alternative locations recorded by classical writers who placed the ‘Pillars’ at the straits of Messina or Sicily. I personally favour Messina, unless there is stronger evidence that some of the islands in or near the Strait of Sicily such as the Maltese or Pelagian Islands or Pantelleria were home to the ‘Pillars’.