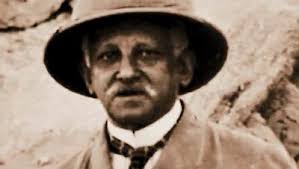 >In recent years there have been claims that the bust was a fake(c).<

In the mid-1920s he became interested in the search for Atlantis. At a conference in Paris in 1926 he suggested Chott el-Jerid as the most likely location for Plato’s lost city, which was inundated around 1250 BC.

Riaan Booysen is a South African researcher (and avid tennis fan) who has written articles on a number of ancient mysteries, which can be found on his website(e). Among his controversial ideas are that the Queen of Sheba, Nefertiti and Helen of Troy were a single person(d).

He offers a major paper on Atlantis(a), in which he bravely identifies its location  as an extensive landmass which included present day Australia. Unlike other writers who have offered similar suggestions based on guesswork, Booysen offers a coherent thesis based on the geology of the South Pacific and early cartography.

His theory requires a radical redating of the Antarctic ice cap, which has led to continued debate on the internet(c).

Booysen has published another contentious offering in 2013, entitled Thera and the Exodus[1025] in which he argues that there were at least two Theran eruptions which led to two separate ‘Exodus’ events by the biblical Israelites, whom he identifies as the Hyksos!

Booysen has now commented on negative feedback from his book(b).

A year later he ventured into even more contentious territory with the publication of BARBELO – The Story of Jesus Christ, now available as a free ebook(f).