A Bull Cult is noted by Plato as one of the characteristics of the culture of Atlantis. Unfortunately, it does little to identify the location of Atlantis since the bull featured prominently in the culture of so many ancient peoples and continues today, principally in the bullfights of Spain, Portugal, and Mexico.

In northern Italy, there was a Gaulish tribe called the Taurini during the first and second centuries BC. The bull was also a symbol of the southern Italic tribes, in a region which Plato informs us was occupied by Atlanteans(e). In Sicily, modern Taormina was formerly known as Tauromenium in Roman times, which may suggest an even earlier association with a bull cult!

Writing in Egerton Sykes’ Atlantis in 1955 (Vol.8 No.3), Vera Howe outlined the extent of the bull cults which ranged from Assyria, across the Mediterranean and up to the British Isles. In Volume 10, No. 4, Käte Müller Lisowski (1883-1960) also wrote of bull links between Crete and Ireland. In the February 1963 (Vol.16 No.1) edition of the same journal, it is recounted that Ireland had bull feasts and bull-fighting in ancient times. There is also evidence of a bull cult among the Picts of Scotland(h). Let us not forget that the Israelites began to worship a golden bull-calf when they thought that they had been abandoned by Moses(b).

It is generally accepted that the bull was also associated with lunar religions(a) as the horns resembled the crescent-Moon. Even today the crescent is one of the principal icons of the Islamic faith.

At the 2005 Atlantis Conference, Professor Stavros Papamarinopoulos delivered a paper(i) outlining the Bronze Age bull rituals in Egypt and the Aegean and their parallels in Iberia. In the Temple of Seti at Abydos there is a well-known wall carving depicting Seti I and his son Ramses II roping a bull and further along the wall, sacrificing it. 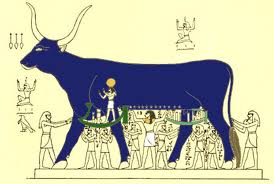 In the seventeenth century, Olof Rudbeck associated the ancient Swedish custom of sacrificing a bull to Odin with the bull immolation described in Plato’s Atlantis.

Carvings of bulls’ heads decorated the home of ancient Anatolia in modern Turkey. There are bull carvings to be seen at Tarxien in Malta and not far away in Northern Tunisia ancient carvings of bulls are also to be found(c).  The ancient Celts also included bulls in their ceremonies. The Assyrians had a bull-god as their guardian. The oldest church in Toulouse is dedicated to St. Taur, a possible reference to an earlier bull cult. Further afield, in India, there is a bull-taming sport, jallikattu, which is practised annually in the villages of the southern state of Tamil Nadu and is recently the subject of a failed attempt to ban it(f).

Peter James in a short appendix to his book, The Sunken Kingdom[047] supports a Lydian origin for the Atlantis tale and argued that Plato’s text makes no reference to the bull-leaping game depicted in Minoan art. However, quoted the studies of the British anthropologist Jane Harrison(1850-1928) who discovered [600]+ that a coin from Troy’s Roman period depicted a bull being sacrificed in exactly the same manner as Plato’s description, namely, suspended from a pillar. The Roman bull sacrifice ritual was known as ‘taurobolium’.

In conclusion, therefore, it must be obvious from the above that Plato’s reference to bull rituals is no definitive guide to finding an exclusive location and so probably has limited value in any quest for Atlantis.