Ark of the Covenant, The

The Ark of the Covenant is one of the most enduring mysteries that originated in the Old Testament. It was recorded there, in great detail (Exod.25:10-22; 37:1-9), how the Ark was constructed to house the tablets of stone inscribed with the Ten Commandments given to Moses. King Solomon built the First Jerusalem Temple with the primary purpose of 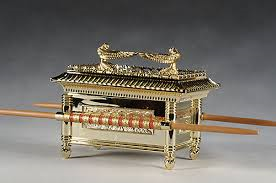 providing a suitable home for the Ark. Some time before the 6th century BC the Ark disappeared and so for at least two and a half millennia, the search for it has been ongoing.

Alfred de Grazia has written at length about the electrical properties of the Ark in his book, God’s Fire [1538].  This suggestion of Mosaic electricity can be traced back to 1913 when Nikola Tesla wrote “…Moses was undoubtedly a practical and skilful electrician far in advance of his time. The Bible describes precisely, and minutely, arrangements constituting a machine in which electricity was generated by friction of air against silk curtains, and stored in a box constructed like a condenser. It is very plausible to assume that the sons of Aaron were killed by a high-tension discharge, and that the vestal fires of the Romans were electrical.” (p).

In 2016, David Hatcher Childress, in Ark of God [1743],  repeated old speculation that the Ark was capable of flight and proposed it as an example of ancient technology!  This flight capability or at least levitation(u) is also suggested by Laurence Gardner [1785].

In 1982, Yehuda Getz, the rabbi in charge of Jerusalem’s Wailing Wall claimed to know the Ark’s location to within 2 or 3 metres, under the Dome of the Rock and the al-Aqsa Mosque. Political considerations have prevented any excavation at the site(d). The late Ron Wyatt also claimed to have discovered the Ark in 1982, under the old city of Jerusalem(f). A 2017 claim is that the Ark is situated near Jerusalem at Kiryat Ye’arim, where excavations will begin soon(g).

Various commentators have endeavoured to link the Ark and its possible discovery with the Freemasons(s). and/or the Knights Templar(t).

One of the best-known books recounting a personal search for the Ark in modern times was by Graham Hancock in the shape of The Sign and the Seal [678],  which ended with a frustrated author outside a church in Axum, Ethiopia. Oddly, Hancock touches on the subject of Atlantis in this book (p.319) where he dismisses the idea of an Atlantic home for Atlantis.

Hancock’s experiences in Ethiopia were repeated by Paul Raffaele and recounted in a 2007 article in the Smithsonian Magazine(b). However, there is a short report(c) that in 1869, Isaac de Karpet, Armenian Patriarch of the library of the monastery of St. James in Jerusalem, along with his brother Dimoteo Sapritchian, gained access to the church in Axum thanks to the intervention of the Abyssinian crown prince Kasa. They concluded that the ‘Ark’ in the church were wooden tablets (tabots) inscribed with the Ten Commandments dating from the 13th or 14th centuries AD.

The de Karpet report was recently echoed by an account(m) of the inside of the Aksum church having been seen by one Edward Ullendorff during WW2 and who much later gave an interview to the Los Angeles Times in 1992, in which he revealed that there was only a replica of the ‘Ark’, which is to be found in churches throughout Ethiopia.>Shortly before that, Roderick Grierson & Stuart Munro-Hay published The Ark of the Covenant [1786],  which focuses on Aksum.

Professor Tudor Parfitt embarked on a quest for the Ark [1782],  which took him halfway around the world, ending up with the Lemba people of southern Africa, who claim to be Jewish. These people also claim to possess the Ark, although in the form of a modest drum-like object known as ngoma currently in a museum in Harare, the capital of Zimbabwe. Parfitt concluded that ngoma was dated to around 1350 AD and as such “it is almost certainly the oldest wooden artefact ever found in sub-Saharan Africa”. Parfitt suggests that this ngoma was intended to replace an earlier Ark and was preserved by the Lemba for 700 years.

A recent website article(a) offers newly discovered evidence for considering Yemen as the hiding place of the Ark. However, closer to home we have a book[1345] by Graham Phillips suggesting that the Ark had been brought back to England, to Temple Herdewyke, near Stratford-upon-Avon. He partly bases this idea on the work of Jacob Cove-Jones, a British historian(e), who died before he could complete his quest for the Ark.

Other suggested locations include Mount Pisgah in Jordan(h), East Prussia(i) and Ireland’s Hill of Tara(j). The fruitless excavations at Tara around 1900 by British-Israelites is now recounted in a recent book by Mairéad Carew [1645].

Expanding the possible locations further west is the suggestion by J. Chamberlain, following the theories of J.P. Noel(l) who proposed in a convoluted tale, that St. Croix in the Caribbean U.S. Virgin Islands as the final resting place of the Ark [1581].

Equally entertaining is the hint from the late Philip Coppens that the Bugarach mountain, near the Rennes-le-Chateau, was also, through rumour, the location of the ‘Ark’. In a colourful article Coppens, links, President Mitterrand, Nazis, Mossad and Steven Spielberg(k). Coppens has also written an interesting article about a failed attempt to locate the Ark led by a Finnish scholar, Valter H. Juvelius (1865-1922) under the Temple Mount in Jerusalem(q).

Many other books and TV documentaries charting the search for the Ark continue to be produced. However, there is also another trend becoming more obvious, which is that there is an increasing number of instances, particularly on the Internet, of the Ark being linked to Atlantis. There is, of course, no evidence ever offered to support such speculation. One of the most recent of these is Opening the Ark of the Covenant, co-authored by Frank Joseph, where he traces the Ark back to Atlantis!

There are probably few people that don’t accept that the Ark had been a real artefact, while many doubt the reality of Atlantis. It is possible that by linking the two, authors hope to achieve credibility transference from one to the other!

The linking of the Ark with Atlantis is not uncommon but the level of b.s. sometimes used to describe this association can be breathtaking, as this excerpt demonstrates – “Yes, there were a number of The ARKS OF THE COVENANT IN THE MIDDLE EAST. THEY HAD COME FROM ATLANTEAN technology that was passed on to the Egpytian mystery schools. Some were built as light therapy healing machines, and other Arks were generators and communication devices between flying saucers and temples priest and technicians. And by tuning up the power of certain designed ARKS you also had some most powerful LASERS and power beaming instruments which can start earthquakes and destructive energy of modern HARP TYPE LASERS (LAZERS). The Ark of the Covenant was designed to do multiple functions? The is what made it extra valuable to the Egpytians as to the Hebrews. It is said by the time of Jesua, the Jewish preisthood had forgotten how to use the ARK for power. but Jesua intuitively knew how to use the ARK, AND activated it while on the cross to manifest a vortex vibration from it, and cause an earthquake with it, while on the Cross to make a demonstration.”(r).

Spencer Alexander McDaniel, an American researcher, has published a lengthy article about the Ark and concluded that while it is possible that it did exist, it is unlikely, for a number of reasons, that it survived(n).  McDaniel is an Atlantis sceptic, who has suggested that it was the destruction of Helike that possibly inspired Plato to invent the story(o).

>2022 began with a report that Uri Geller had announced that “he had discovered the location of the Ark of the Covenant while dowsing on the ground floor of his new museum of himself in Jaffa”.(v) Obviously, he declined to reveal the exact site, knowing that he can milk this claim for more free publicity. In 2021, he purchased the Scottish Lamb Island, because of its connection with the Giza pyramids(w). He ended the year with the claim that aliens are due to arrive soon after thousands of years of contact(x). So far the prankster(y) has avoided the subject of Atlantis.<

>(i) The ark of the Covenant hidden under the Kaliningrad | Earth Chronicles News (archive.org)<

(q) Found: one Ark of the Covenant? – Eye Of The Psychic (archive.org)

(r) Carol Chapman- Ark of the Covenant from Atlantis? (carolchapmanlive.com)

(s) The Templars and the Ark of the Covenant? – Templar History

(t) Ark of the Covenant and the Knights Templar! – The Templar Knight