The Hyksos is the name applied to two dynasties of foreign kings who ruled Egypt around 1650-1530 BC(a). Gerard Gertoux suggests three dynasties reigning from circa 1750- 1530!(l) They are generally accepted to have been Semitic people, from an unknown land, who invaded Egypt around 1710 BC. They ruled for over a hundred years until defeated by the Egyptian Pharaoh Amasis I.

Their name was originally taken to mean ‘Shepherd Kings, but more recently, it is accepted that the Egyptian term ‘heqa-khase’ which means ‘rulers of foreign lands’ gives us a simple but credible title of ‘Foreign Kings’. It has been suggested by David J. Gibson (1904-1966) that the modern interpretation indicated that the Hyksos ruled a vast empire and has devoted a book[1507] to justifying this view(g). This empire lay mainly to the east of Egypt with the possible exception of Crete. Gibson identifies the Hyksos with the biblical Edomites! 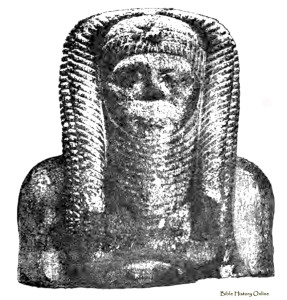 This identification of the Hyksos with the biblical Amalakites was supported by Velikovsky, Rohl and Donovan Courville(o).>This identification is disputed by Emmet Sweeney [1867], who is generally sympathetic to Velikovsky’s revised chronology, but disagrees with him in this instance.<

There have also been persistent suggestions that there were strong links between the Hyksos and Crete, as referred to both above and below. But the exact nature of the links is unclear and may not be more than you get between nations trading over an extended period. The relevance of such links, if they were ever shown to be political rather than commercial, would take on new significance for supporters of the Minoan Hypothesis. Time will tell.

Peter A. Clayton, an Egyptologist and author of Chronicle of the Pharaohs suspected that the Hyksos had their origins in Crete. E. J. de Meester has suggested links between Crete and the Hyksos, an idea included in an article by Philip Coppens(b). In a similar vein, Diaz-Montexano claims that a study of the names of the Hyksos pharaohs suggests to him that they were proto-Greek or Mycenaeans.

Perhaps even more radical is the suggestion by Riaan Booysen that the Hyksos were the fleeing Israelites in the biblical Exodus story(c). He claims that there were two ‘exoduses’ which coincided with two separate eruptions on Thera. This idea is not as new as it might seem as something similar was proposed by the 1st century AD Jewish historian Josephus(d).

Nick Austin also identifies the Hyksos as Jews [1661.184] but is more generous than Booysen claiming that there were four separate eruptions of Thera. Like many others, he has also associated the biblical Exodus and the Plagues of Egypt with the Theran eruptions.

In July 2020, it was reported that “new research led by Bournemouth University archaeologists supports the theory that the Hyksos, the rulers of the 15th Dynasty of ancient Egypt, were not from a unified place of origin, but Western Asiatics whose ancestors moved into Egypt during the Middle Kingdom lived there for centuries, and then rose to rule the north of Egypt.”(k)

The full facts relating to the Hyksos’ rule are only slowly emerging(m) and I expect that it will be some years before a definitive history can be agreed upon. Just over a year after I wrote this, In March 2021, Diego Ratti published Atletenu, in which he identified the Hyksos as Atlanteans, with their capital situated at Avaris in the eastern Nile Delta(n).

>A paper by the distinguished Austrian archaeologist Manfred Bietak entitled Avaris: The Capital of the Hyksos(p) should be read in conjunction with Ratti’s theory.<

(m) Did the Hyksos Pull Off a Peaceful Invasion of Egypt? | Ancient Origins (ancient-origins.net)