<Volcanoes at their most explosive have played an important part in the mythologies and histories of humans.

A recent Irish Times article (10/2/22) observed “Despite the small number of volcanoes here, European culture has been deeply influenced by volcanic activity. In ancient Greek mythology, volcanoes were where the Olympian gods had imprisoned their rivals, the Titans. When the Romans adopted the Greek religion, Mount Etna became the home of Vulcan, the god of fire and blacksmiths, who worked his forges underneath the mountain.”(u)<

However, the red, white and black stone that Plato may be related to volcanic eruptions that produce rocks of tufa (red), pumice (white) and lava (black). Pumice has been found at various locations in Egypt and identified as originating not only from Thera, but also from eruptions on the Greek islands of Nisyros and Giali as well as the Italian Lipari Islands(o).>Pumice has a chemical fingerprint which enables its source to be identified(t).<

Jelle Zeilinga de Boer and Donald Sanders are the authors of Volcanoes in Human History[681] which supports the idea that the eruption of Thera was a factor in the development of the Atlantis story and also suggests a link with the Flood of Deucalion. 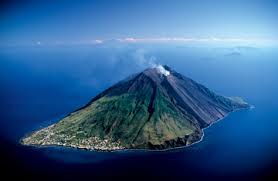 Apart from Santorini, Jim Allen had initially proposed the Andean village of Quillacas, which lies on top of a volcano, as the site of Atlantis, but later found that the nearby site of Pampa Aullagas had a greater correspondence with the description of Atlantis. More recently Richard W. Welch has suggested the eruption of a supervolcano in the Atlantic as the cause of Atlantis’ demise. And so the idea of volcanic destruction of Atlantis still has some support!

March 2014 saw a post on Dale Drinnon’s website(g) take the linkage between Atlantis and a volcano rather further with the suggestion that “the capital city of Atlantis in Plato’s description was built in the caldera of an extinct volcano and that many of the features of the description are volcanic in origin. The “Poseidon’ temple is the pyramidal volcanic neck, an erosional feature that stood out like a conical mound some hundreds of feet in diameter and possibly some hundreds of feet high on the outside. there was a tunnel bored through this aligned East and West, to allow the sunlight in at the beginning and the end of the day for certain rituals.”

In December 2014 a report from Princeton University revealed that a massive series of volcanic eruptions 66 million years ago can be aligned with the extinction of the dinosaurs and should be included as part of the cause of that extinction along with the Yucatan meteorite impact(h). However, in February 2021, a report from Harvard proposed that the Yucatan impactor was a comet rather than an asteroid or meteor(s).

In 2009, it was reported(q) that another example of contemporaneous meteorite impact and flood volcanism was identified in Belarus.

Furthermore, there is now evidence(m) that the eruption of El Chicon volcano in Southern Mexico around 540 AD led to the disruption of the Maya civilisation. Can there be a connection between these two events? In 2020, it was reported that the massive Tierra Blanca Joven eruption of the Ilopango volcano in El Salvador had been accurately dated to within a year or two of 431 AD, which also devastated Maya communities within an eighty-kilometre radius(r).

The BBC reported(n) in 2016 that “Deep-sea volcanoes are so remote until recently we did not even know they existed” and although “We do not see them erupt, yet more than half of the Earth’s crust can be attributed to their dramatic explosions” and “In fact, the mid-ocean ridges form the largest volcanic systems on Earth. But as they are largely hidden from sight, they have long remained elusive.”