Doggerland is a term applied to a shallow region (Fig.1) of the North Sea between Denmark and the North of England that covers an area of around 10,000 sq. miles. The appellation was coined by Professor Bryony Coles in 1998. However, the name has been applied recently(f) to nearly the totality of the Celtic Shelf (Fig.2). Ulf Erlingsson who had promoted his theory(b) that Atlantis h 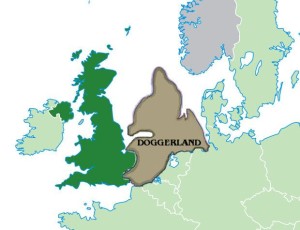 ad been located in Ireland (with 98.9% confidence!) has explained that the Egyptian story of Atlantis is the result of an account of megalithic Ireland conflated with a report of the inundation of Doggerland in 6200 BC resulting from a Norwegian storegga. In turn, this flooding may have been the inspiration behind the ‘impassable shoals’ described by Plato following the submergence of Atlantis. 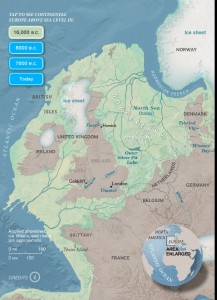 The flooding of the Dogger Bank has been attributed to a 6200 BC event apparently caused by either an outpouring of meltwater from Lake Agassiz in North America or a huge tsunami generated by a Norwegian storegga(e). This event was covered in an extensive article in the November 2012 edition of the BBC Focus magazine. The same article has a sidebar on Atlantis which suggests that there is “perhaps just one archaeological theory that has any serious claim on the myth.” Then, not for the first time, the BBC offered tacit support for the Minoan Hypothesis in spite of the fact that, at least ostensibly, it does not match Plato’s description of Atlantis in terms of either time, size or location and offers no rationale for its stance. Deruelle in which he also argues that Doggerland was the location of the Great Plain of Atlantis that stretched from the east of the Dogger Bank and extended as far as what is now Denmark. Plato described the plain as being surrounded by a huge ditch. Then Deruelle, with a flash of ingenuity claims that it was not a ditch but instead was a dyke, designed to hold back the slowing advancing waters of the North Sea that were being fed by deglaciation. He endeavoured to reinforce this claim with the proposal that the Greek word for a ditch, ‘taphros’ can also be used for dyke. This interpretation seems possible according to W.K. Pritchett, a distinguished historian [1622.52.5].

Robert John Langdon has proposed that megalith builders from Africa came to Doggerland as the Ice Age ended and when Doggerland submerged they migrated to what is now mainland Britain, eventually constructing Stonehenge(i).>But Langdon has gone further and also claims that Doggerland was actually Atlantis(aa).<

A 2014 ‘Drowned Landscapes’ exhibition(m) organised by Dr Richard Bates of the Department of Earth Sciences at St Andrew’s University, reveals in greater detail the flora and fauna, as well as the lives of its inhabitants, of this submerged world. Much of the information was gleaned from data provided by oil and gas companies, combined with artefacts recovered from the seafloor.

In 2015 it was announced that €2.5 million in funding from the European Union has enabled a number of archaeologists from Britain’s top universities to team up for what will be the most intensive study of Doggerland so far(o)(q). Joined by experts from the University of Ghent and assisted by the Belgian Navy they located the first identifiable submerged settlements on the floor of the North Sea. Until now (2019) the only evidence of human habitation in the region were occasional artefacts caught up in fishermen’s nets.

On Sunday, January 13th 2019. the UK’s Sunday Express delighted its readers with two Atlantis stories(t)(u). First, the online edition of the paper had a story by one of its reporters, with an ‘Atlantis Discovered’ headline claiming that the remains of an ancient 8,000-year-old city, home to ‘tens of thousands’ of people, had been discovered in the North Sea, in a huge region sometimes referred to as Doggerland. The reporter cites Dr Richard Bates in support of this account. Unfortunately, the 2012 comments by Dr Bates never mentioned ‘a city’, but a vast area occupied by ‘tens of thousands’ of people, presumably early farmers(s). Then the same edition of the same paper by the same ‘reporter’ with another ‘Atlantis Found?’ headline, offered a video clip of the Maltese island of Filfla, while the commentator told us that Plato had said that a devastating earthquake had destroyed Atlantis it was finished off by an eruption. This is factually incorrect as Plato never mentioned an eruption. These two accounts are a sad reflection of the quality of media reporting today.

>In 2020, David Keys, author of Catastrophe [1330] wrote an article for the UK’s Independent newspaper outlining the most recent research into the 6200 BC tsunami that destroyed Doggerland. “It is estimated that multiple giant waves inundated some 2,700 square miles of land – from Scotland in the north to Norfolk in the south.

New underwater research carried out by the universities of Bradford, Warwick, St Andrews and Wales has for the first time discovered that the tsunami devastated parts of East Anglia and adjacent land which is now submerged beneath the southern part of the North Sea.” (z)<

The North Sea has been advocated by a variety of writers as the original site of Atlantis. Jürgen Spanuth specified his native Heligoland as its location in his well-researched work, Atlantis of the North[015]. >However, Spanuth was not the first to make this suggestion as Heinrich Pudor, had advocated Helgoland as Atlantis in the 1930’s [1693][1694], but was unreferenced by Spanuth.<

Robert Scrutton drew heavily on the contents of the controversial Oera Linda Book to support his view of an Atlantis or Atlantean colony in the Frisian Islands of the North Sea[117][118].

Georg Lohle in his book[446] on world history identifies a location between England and Denmark that was inundated about 2000 BC. He also makes extensive use of the Oera Linda Book. His German language website(a) has a wide range of photos and diagrams. Lohle daringly resurrects the old idea of the Earth being hollow and then combines it with another controversial concept, namely that it is still expanding(b).

In the middle of the 20th century we find Robert Graves and Rachel Carson were probably the first to suggest the Dogger Bank as the location of Atlantis. More recently Jean Deruelle(e), Sylvain Tristan(c) and Guy Gervis(d) have all opted for a location near the Dogger Bank, now more popularly known as Doggerland.

The most recent challenger for the Atlantis title is located in the vicinity of Rockall, an uninhabited islet north west of Ireland. 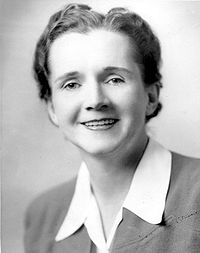 worldwide acclaim for her 1962 book, Silent Spring[1268],  which dealt with the dangers of pesticides.

However, it was in an earlier book, The Sea Around Us[1267], that she touched on the subject of Atlantis. In it, she identified the Dogger Bank in the North Sea, which was submerged around 4,000 years ago, as possibly the inspiration behind the story of Plato’s sunken city and appears to have been the first person to make this suggestion.