Timothy J. Stephany is a keen student of mythology in general and Norse mythology(a) in particular. He has also written a book, The Eden Enigma[840],  which explores the background to the biblical story of the Garden of Eden. He has an extensive website that offers a fascinating and well illustrated paper(b) on the remarkable Göbekli Tepe site which includes a number of carved animal that Stephany suggests may be a representation of constellations when they were carved. His site also includes a review(c) of Jim Allen’s theory,  which places Atlantis in the Andes, but concludes at the end of a lengthy paper that the evidence is not strong enough. His article on paleoastronomy(d) should be read in conjunction with his comments on Göbekli Tepe.

J.M. Allen, a Scotsman, worked in the 1970’s as an expert in satellite mapping with the British Royal Air Force. He was also a researcher of ancient measuring systems. The combination of these two interests led to a 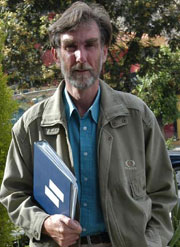 conviction that Plato’s Atlantis could be matched with a site in the Altiplano of Bolivia,which he outlined in his book Atlantis: The Andes Solution[0040].  Coincidentally, in the same year, Tony Morrison published an article entitled The Bolivian Atlantis(k-n).

Allen’s case is primarily based on the discovery of a vast canal network in the region together with aerial photography indicating concentric rings on the ground. His chosen site of Pampa Aullagus contains red, white and black rock reminiscent of the Atlantean masonry described by Plato.

In a TV documentary that focused on his theory it was suggested that the other nine kingdoms that comprised the Atlantean domain were probably to be found in South America.

In 2008 Allen delivered three papers to the 2nd Atlantis Conference[750] in Athens. All three papers are available online in pdf format(g)(h)(i).

2009 saw the publication of a second book, Atlantis: Lost Kingdom of the Andes[207] designed to reinforce his original thesis of Atlantis on the Altiplano of Bolivia. A trilogy was completed in 2010 with the publication of The Atlantis Trail (Kindle)which records his travels in the Andes in search of Atlantis(b). A small hotel is now being built in Pampa Aullagus to cater for increased number of tourists, no doubt in response to the work of Jim Allen.

In 2012, Allen published Atlantis and the Persian Empire, which is available to download as a free pdf file(c). This work is really just a reprise of his earlier writings. In this somewhat provocatively titled book he claims that Plato took the geography of the Atlantis story from the Andes, a theme he has been promoting since 1998.

However, he also maintains that the military history in Plato’s narrative was based on the war between Athens and the Persian Empire in the 5th century BC. Another of his more exotic claims is that the Sea Peoples were from South America. Allen devotes a considerable part of the book to ancient South American metrology and ends with a comparison of relative merits of the Altiplano versus Santorini as the inspiration behind Plato’s Atlantis story.

An extensive critique of Allen’s theories is offered by Timothy J.Stephany on his website(e). Nevertheless, although I consider Allen’s basic theory regarding Atlantis unacceptable, I find that part of his website showing images(f) of an extensive range of artefacts demonstrate most eloquently that South American civilisation was heavily influenced by distant cultures, both east and west.

Support for Allen’s views has continued into 2013(d), despite those elements of his theory that still conflict with Plato’s narrative: dating, dimensions and the improbability of an invasion of the eastern Mediterranean by a force from the west coast South America! However, I have found that in 1900, Peter de Roo devoted chapter seven of his History of America before Columbus[890.v1] to a review of the idea that at various times native Americans travelled eastward and among other things were responsible for the settling of Egypt!

Allen’s site offers an extensive article on the life and research of Posnansky, including excerpts from his work(j).