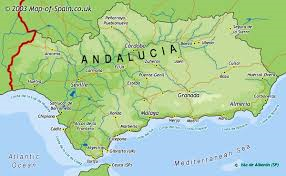 Andalusia has been identified by a number of investigators as the home of Atlantis. It appears that the earliest proponents of this idea were José Pellicer de Ossau Salas y Tovar and Johannes van Gorp in the 17th century. This view was echoed in the 19th century by the historian Francisco Fernández y Gonzáles and subsequently by his son Juan Fernandez Amador de los Riosin 1919. A decade later Mrs E. M. Whishaw published[053] the results of her extensive investigations in the region, particularly in and around Seville. In 1984, Katherine Folliot endorsed this Andalusian location for Atlantis in her book, Atlantis Revisited[054].

Stavros Papamarinopoulos has added his authoritative voice to the claim for an Andalusian Atlantis in a 2010 paper(a) delivered to the 12th International Congress of the Geological Society of Greece. He argues that the Andalusian Plain matches the Plain of Atlantis but Plato clearly describes a plain that was 3,000 stadia long and 2,000 stadia wide and even if the unit of measurement was different, the ratio of length to breadth does not match the Andalusian Plain. Furthermore, Plato describes the mountains to the north of the Plain of Atlantis as being “more numerous, higher and more beautiful” than all others. The Sierra Morena to the north of Andalusia does not fit this description. The Sierra Nevada to the south is rather more impressive, but in that region the most magnificent are the Atlas Mountains of North Africa. As well as that Plato clearly states (Critias 118b) that the Plain of Atlantis faced south while the Andalusian Plain faces west!

Dr. Rainer W. Kuhne supports the idea that the invasion of the ‘Sea Peoples’ was linked to the war with Atlantis, recorded by the Egyptians and he locates Atlantis in Andalusiain southern Spain, placing its capital in the valley of the Guadalquivir, south of Seville. In 2003, Werner Wickboldt, a German teacher, declared that he had examined satellite photos of this region and detected structures that very closely resemble those described by Plato in Atlantis. In June 2004, AntiquityVol. 78 No. 300 published an article(b) by Dr. Kuhne highlighting Wickboldt’s interpretation of the satellite photos of the area. This article was widely quoted throughout the world’s press. Their chosen site, the Doñana Marshes were linked with Atlantis over 400 years ago by José Pellicer. Kühne also offers additional information on the background to the excavation(e).

Although most attention has been focussed on western end of the region, a 2015 theory(d) from Sandra Fernandez places Atlantis in the eastern province of Almeria.

Georgeos Diaz-Montexano has pointed out that Arab commentators referred to Andalus (Andalusia) north of Morocco being home to a city covered with golden brass.