Scylla and Charybidis were a sea monster and a whirlpool in Greek mythology who according to Homer and other writers were located opposite each other across a narrow strait. This led to the idiomatic phrase “between Scylla and Charybidis” similar to our more modern phrase of being “between the devil and the deep blue sea” describing being caught between two opposing forces.

Many, such as Heinrich Schliemann[1243], assume the original to have been located between Sicily and the Italian mainland at the strait of Messina. Arthur R. Weir in a 1959 article(d)  refers to ancient documents, which state that Scylla and Charybdis lie between the Pillars of Hercules(c) .

A minority have opted for the Scylla being Calpe (The Rock of Gibraltar) and Charybdis being Mt. Abyla across the strait in North Africa or in other words the Pillars of Heracles(a) . However, Professor Arysio Santos promoting his Atlantis in Indonesia theory suggested that the ‘original’ Pillars of Heracles were in at Sunda Strait and later brought to ancient Greece where it was included by Homer in his Odysseus as Scylla and Charybdis!(b)

>Anatoly Zolotukhin has proposed that Scylla & Charybdis has been situated in the Bosporus near the Pillars of Heracles, while he located Atlantis itself in Crimea near Evpatoria(e).<

Writers who have located the wanderings of Ulysses in the North Atlantic have gone further afield in their search for Scylla and Charybdis with the west coast of Scotland (Pillot[742] and Nyland[394]), the Orkneys (Sora)[395] southwest Cornwall near the Scilly Isles (Wilkens)[610] . 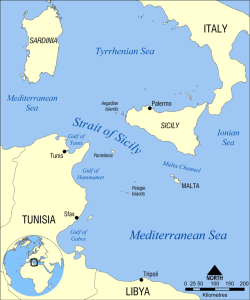 The Strait of Sicily is the name given to the extensive stretch of water between Sicily and Tunisia. Depending on the degree to which glaciation lowered the world’s sea levels during the last Ice Age; three views have emerged relating its possible effect on Sicily during that period:

(ii) The Strait of Messina was closed, joining Sicily to Italy, while the Strait of Sicily remained open.

(iii) Both the Strait of Messina and the Strait of Sicily were closed, providing a land bridge between Tunisia and Italy, separating the Eastern from the Western Mediterranean Basins.

I find it strange that what we call today the Strait of Sicily is 90 miles wide. Now the definition of ‘strait’ is a narrow passage of water connecting two large bodies of water. How 90 miles can be described as ‘narrow’ eludes me. Is it possible that we are dealing with a case of mistaken identity and that the ‘Strait of Sicily’ is in fact the Strait of Messina, which is narrow? Philo of Alexandria (20 BC-50 AD) in his On the Eternity of the World(a) wrote “Are you ignorant of the celebrated account which is given of that most sacred Sicilian strait, which in old times joined Sicily to the continent of Italy?” (v.139). Some commentators think that Philo was quoting Theophrastus, Aristotle’s successor. The name ‘Italy’ was normally used in ancient times to describe the southern part of the peninsula(b).

Armin Wolf, the German historian, noted(e) that “Even today, when people from Sicily go to Calabria (southern Italy) they say they are going to the “continente.” I suggest that Plato used the term in a similar fashion and was quite possibly referring to that same part of Italy which later became known as ‘Magna Graecia’. Robert Fox in The Inner Sea[1168.141] confirms that this long-standing usage of ‘continent’ refers to Italy.

It is worth pointing out that the Strait of Messina is sometimes referred to in ancient literature as the Pillars of Herakles and designates the sea west of this point as the ‘Atlantic Ocean’. Modern writers such as Sergio Frau and Eberhard Zangger, among others, have pointed out that the term ‘Pillars of Herakles’ was applied to more than one location in the Mediterranean in ancient times.

The Strait of Messina is frequently associated with the story of Scylla & Charybdis, which led Arthur R. Weir in a 1959 article(d) to refer to ancient documents, which state that Scylla & Charybdis lie between the Pillars of Heracles.

In 1910, the celebrated Maltese botanist, John Borg, proposed[1132] that Atlantis had been situated on what is now submerged land between Malta and North Africa. A number of other researchers, such as Axel Hausmann and Alberto Arecchi, have expressed similar ideas.

The Strait of Sicily is home to a number of sunken banks, previously exposed during the Last Ice Age. As levels rose most of these disappeared, an event observed by the inhabitants of the region at that time. The MapMistress website(c) has proposed that one of these banks was the legendary Erytheia, the sunken island of the far west. The ‘far west’ later became the Strait of Gibraltar but for the early Greeks it was the Central Mediterranean.