Portugal, in the 12th century, began as a county, that is, governed by a count. Wikipedia notes that it “refers to two successive medieval counties in the region around Braga and Porto, today corresponding to littoral northern Portugal, within which the identity of the Portuguese people formed. The first county existed from the mid-ninth to the mid-eleventh centuries as a vassalage of the Kingdom of Asturias and later the Kingdoms of Galicia and León, before being abolished as a result of rebellion. A larger entity under the same name was then re-established in the late 11th century and subsequently elevated by its count in the mid-12th century into an independent Kingdom of Portugal.”

Impressive megalithic sites are to be found in Portugal, among which is the large Almendres Cromlech (Cromeleque dos Almendres) near Evora. It still has 93 huge stones that form two concentric rings. They were erected there around 4000-5000 BC making them about 2000 years older than Stonehenge.(a)

According to Mel Nicholls [0944], the Bell Beaker culture originated in Portugal around 2800 BC and has nominated the Beaker people in Britain as Atlantean, whereas Donald Ingram argues that their successors in Britain, the Wessex II culture were Atlantean. 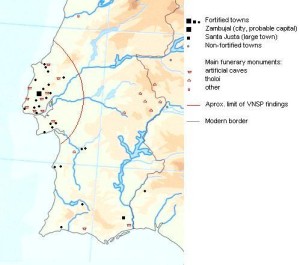 >Daughtrey’s book has been updated and contains what he calls “dramatic new evidence”. His book is supported by a website(d), where you will find additional articles, interviews and reviews.<