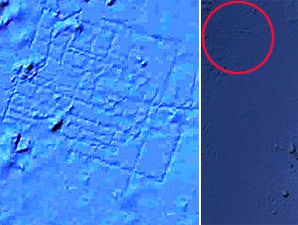 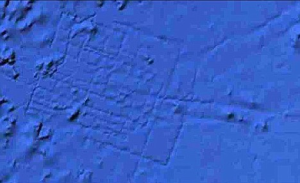 images. The one that received the most widespread attention was situated in the Atlantic west of the Canaries. >Bernie Bamford, a British aeronautical engineer, got widespread media coverage in 2009 with this ‘new’ discovery. However, it is claimed that these features were discovered even earlier by Larkin & Cynthia Jones(h).<

The location in question purports to show a gridlike street system. However, the scale involved would suggest ‘streets’ half a mile wide, which even for Atlanteans would have been rather unlikely. Google updated their data with a technical explanation for the anomaly(b). However, Michael Jaye is unwilling to accept Google’s response and has described the gridlike feature to have been the Plain of Atlantis(f). A comparable site(c) near Puerto Rico has been highlighted by Deb Johnson, which can probably be explained similarly.

A slightly different type of image has been spotted in lakes in the Peruvian  Andes(d) as well as Manzanillo Bay in the Dominican Republic(e). These images of shallower waters show a range of rectangular shapes that stop dead where they meet the shore with no continuation on land. Once again I suspect flawed processing of the scanning data.

>May 2022 saw more nonsense of this ilk in the tabloids, with headlines proclaiming the discovery of a ‘Yellow Brick Road to Atlantis’, north of Hawaii in the Pacific. In fact, the ‘road’ is a recognised volcanic feature and has never been claimed as anything else by its discoverers(i).<

Satellite Imagery has recently been introduced into the Atlantis search with a variety of location claims based on features visible from space. These assertions include Albania (2007), Andalusia, Spain (2003), Cyrenaica, Libya (2005) and Sherbro Island, Sierra Leone (2007). All such claims must, of necessity, be treated with extreme caution unless substantiated by archaeology on the ground (or underwater). At best, only one of the sites listed here can be correct and probably all are not, since Atlantis is supposed to have been submerged and so not yet readily visible to the scrutiny of our current aerial mapping technology.

In 2010 there was a claim that Atlantis had been located with satellite imagery that placed it underwater between Bermuda and the Bahamas.

One of the most extreme claims based on images has come from Joseph P.Skipper who has identified some seafloor markings as an ancient script, apparently ignoring the fact that the lines of the writing would probably have to be a mile in width!

>Skipper also promoted the rectangular Google Earth images of the Atlantic, west of Gibraltar as the enormous ruins of manmade structures(c). Others claimed that the lines were ‘streets’. When Google explained that the images were a consequence of flawed data 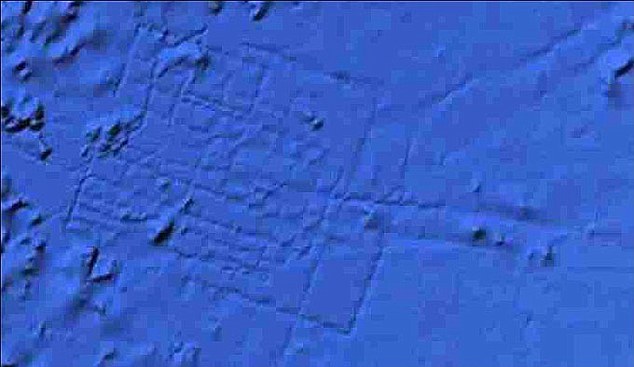 processing cries of ‘cover up’ could be heard. In the end, people believe what they want to believe.

In April 3, 2018, British tabloids regurgitated the same flawed images under the familiar ‘Atlantis FOUND’ headline, this time crediting Blake Cousins as the ‘discoverer’(d).<

In July 2021 I was sent a number of images that purported to show anomalous underwater images in the Central Mediterranean northeast of Malta. At first sight, they appeared to show extensive manmade features. However, further investigation eventually revealed that the images were the consequence of the flawed computer interpretation of sonar data. In December 2021 Luigi Usai produced (a)(b) the same flawed imagery as evidence that he had discovered a lost submerged civilisation!

(c) Ancient Atlantis or Another? (bibliotecapleyades.net) *

Hispaniola is the second largest island in the West Indies, containing Haiti and the Dominican Republic. Before Columbus, Hispaniola was known by the locals as Quisqueya – Mother of the Lands. It is sometimes spelt Kiskeya.

In 1794 a Guatemalan doctor and scholar, Paul Felix Cabrera, proposed that Hispaniola was Atlantis as well as a mysterious Atlantic island called Septimania. However, his theories, although revolutionary, were flawed by political bias against neighbouring Cuba.  In the mid-19th century, Charles Etienne Brasseur de Bourbourg was another who proposed that Hispaniola was in fact a remnant of Plato’s Atlantis. In 1885 the American historian, Hyde Clarke, also suggested Hispaniola as a possible location.

The most recent advocate is Prof. Emilio Spedicato who proposes(a) the island as the home of Atlantis and contends that a consideration of the topography of Hispaniola suggests that the ruins of the capital city, if not completely destroyed by the catastrophic event (most probably a huge tsunami due to either an oceanic impact of a comet or an Apollo object or to the tidal effects of a planet passing close to the Earth) lie under thick sediments in the bottom of Lake Henriquillo, close to the southern coast of Santo Domingo, near the border with Haiti.

In January 2010 an archaeologist, Fianchy Torres, claimed(b) that a site in Manzanillo Bay in the northwest of the Dominican Republic, near the Haitian border, was the location of Plato’s Atlantis(c). He based his contention on anomalies he found on Google Earth images and sea level changes. Similar underwater anomalies have been identified in Peru, near Puerto Rico as well as the Canaries, which appear to be the result of data processing errors.

The idea of Atlantis in Hispaniola, inspired by the work of Spedicato, is now supported by the Kiskeya-Atl Research Center(d), which has announced that it will host a three-day conference in November 2018, with an invited panel of “renowned scholars and researchers on the topic.” Hervé Fanini-Lemoine, is one of the founders and current chairman of the Research Centre. Its purpose “is to research and find artefacts to sustain the hypothesis which says the lost land of Atlantis is, in fact, KU-ISH-KU-EYA, ‘Mother of Lands'”.

>Andrew Collins who proposes Cuba as the location of Atlantis has offered a critical response to Spedicato’s Hispaniola theory in both Gateway to Atlantis and its revised version Atlantis in the Caribbean.<