The Egadi Islands are located off the west coast of Sicily and were the location for a naval battle in 241 BC that resulted in the defeat of the Carthaginians by the Romans which brought an end to the First Punic War.

At the height of the last Ice Age, the islands were connected by a landbridge to the Sicilian mainland, because of the lower sea level(c). They have been suggested by Andis Kaulins(a) as the location of the kingdom of Gadirus, who was the twin brother of Atlas, the first king of Atlantis. Until recently, it was generally accepted that the 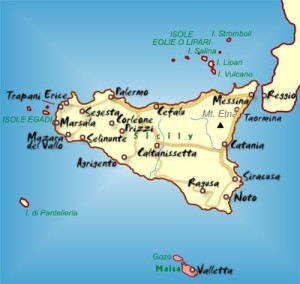 realm of Gadirus had been situated in the vicinity of modern Cadiz, known in ancient times as Gades. This idea was enhanced by its proximity to the Strait of Gibraltar, deemed by many to be the site of the Pillars of Heracles.

However, there has been growing support for the idea of the Pillars, referred to by Solon/Plato, being situated in the Central Mediterranean, at either the Strait of Messina or the Strait of Sicily, the latter supported by Andis Kaulins, who goes further and suggests a link between Tartessos and ancient Carthage across the Strait in Tunisia.

More recently, Albert Nikas has argued cogently(b) for placing the Pillars of Heracles in the vicinity of the Egadi Islands and identifying them with Plato’s Gades and then concluded that Malta had been ‘the island in front of the Pillars’ and was Atlantis.

If the name of the Egadi Islands is more than just evocative of Plato’s Gades and since Gades has also been associated with Erytheia in the story of the ‘Trials of Hercules’, then if Izabol Apulia’s Map Mistress website is correct in locating Erytheia(d) between Pantelleria and the Egadi Islands it would confine all the ‘Trials’ in the Central and Eastern Mediterranean, consequently, locating the Pillars of Heracles somewhere in that region.

Opposite the Egadi Islands on the mainland of Sicily is the port of Marsala, which has also been identified, by Massimo Rapisarda, as another possible location for Atlantis.