Advanced Technology is regularly claimed by ‘fringe’ writers to have existed in ancient times. These claims usually have one of two aims, either to support the idea that in ancient times there was a civilisation/s with highly advanced technology since lost, or that such technology was given to ancient societies by aliens from other planets and was also lost over time. Both schools of thought offer the same ‘evidence’ to support their claims.

Technology can be defined as techniques, skills, methods and processes, usually intended to improve the human lifestyle. ‘Advanced’ is a relative term implying superiority over what had previously existed – wheeled vehicles were an improvement on sledges or bronze tools were better than copper ones.

Also from Egypt is the claim that there is compelling evidence of powered stone cutting ‘machinery’. Similar evidence is also found in South America. A one hour Russian video with English dialogue, relating to this, is quite thought-provoking(g). While the evidence is strong, we cannot rule out the possible existence of long-forgotten techniques rather than mechanical technologies, of which nothing has been found. In the case of ancient Egypt, we have the remains of their primitive tools as well as tomb walls decorated with the same implements. If they had possessed some advanced technology, why did they need those simple tools, which are still available to us, or depict such technology on their tomb walls?

For me, it is also remarkable that cultures such as that of the Pueblo people of the American Southwest managed to “create architectural complexes using advanced geometry — with incredible mathematical accuracy”(o) despite having no written language or system of numerical notation.

Chris Dunn, famous for his belief that the Great Pyramid was in fact built as a power generator[1234], has also claimed that the ancient Egyptians were capable of advanced machining(k) . Margaret Morris, a respected Egyptologist, took issue with Dunn, challenging him to a debate, which, as far as I can ascertain, never materialised. Morris encapsulated her objections thus(l): “In short, Chris Dunn’s methodology is so poor that he has resorted to inventing a cataclysm that cannot be scientifically substantiated and he elevates the pyramid builders to the technological level of space travelers, with no physical evidence at all for either assertion.” 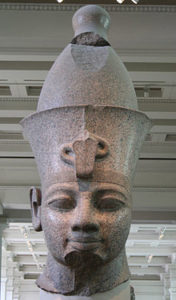 For my part, if the 2.9m high red granite head of Amenhotep III was carved by the Egyptians, without alien intervention, Dunn’s claims are pretty shallow. However, I think it only fair that readers should have access to Dunn’s side of the dispute(m).

However, I must point out that the late Dr Jose Alvarez Lopez was insistent that he had seen evidence of ancient machining on exhibits in the Cairo Museum that were later removed!(t).

Sometimes the process is reversed and simple technology is discovered today, which could have been known in the past, but since lost, which might explain the megalithic structures that still fill us with awe. An example of this is the discovery by W.T. Wallington(j), who calls it a ‘rediscovery’, of a simple method using a lever and a couple of pivots, for moving concrete blocks weighing many thousands of pounds.

A recent article on the Ancient Origins website by Lia Mangolini(r) offers her view that crude chemistry, using plant extracts, provided the means of dissolving rock, which could explain how some quality artefacts as well as tight-fitting ancient masonry, such as found in Peru and Egypt, may have been achieved. This is certainly worth a read, but I would prefer to see a demonstration.

The idea that advanced technology existed in Atlantis has been regularly claimed by various writers since the latter part of the 19th century. However, I must emphasise that Plato offered no suggestion of the existence of any such technology.

Even more worrying is the recurrent claim that atomic warfare was engaged in on the Indian subcontinent thousands of years ago(z). The late Philip Coppens wrote a short paper on this possibility in 2005(c).> David Hatcher Childress has also endeavoured to cash in on the same claim in a number of his books [1355] and online(u). Childress also offers a list of his top-ten technologically advanced ancient civilisations(y).<Nick Redfern has also entered this market with his Weapons of the Gods [1832].

Debunking such ideas is a free 25-page ebook published by Jason Colavito(v).

Equally persistent are claims of flying machines in ancient India(w) which were given impetus by the publication of Aeronautics, a Manuscript From the Prehistoric Past, a translation of the 3,000-year-old Vymanika Shastra by G.R.Joyser[1340].Some have gone so far as to claim that space flight had been achieved thousands of years ago in India(x).

Commenting on the Maltese temples Smutny proposes in his book Atlantis Unveiled [1733], that the complexes “were used probably as generators of high-frequency acoustic waves. Purpose was (maybe) to arrange a communication channel between various islands.”

Although the idea of electricity in ancient Egypt is a recurrent speculation, the possibility of electricity in ancient India is only marginally more credible. However, James Hartman refers(p) to another Sanskrit text which supports this belief, telling us that “In another amazing Indian text, the Agastrya Samhita, gives the precise directions for constructing electrical batteries: