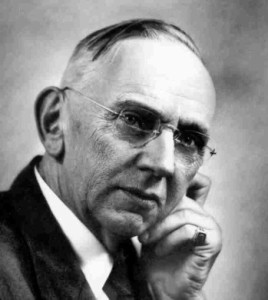 In due course, Cayce’s trances were producing prophetic utterances or ‘readings’, that produced ideas totally at variance with his Christian upbringing, such as reincarnation and contact with the dead. During his lifetime over 14,000 ‘readings’ were recorded. In 1931 the Association for Research and Enlightenment (A.R.E.) was founded by Cayce to manage a depository of his ‘readings’.>Cayce also claimed to be the reincarnation of an ancient Egyptian priest Ra-Ta!<

Robert Bauval in his Secret Chamber[859] reveals that Cayce seemed to have had a photographic memory and worked for up to fifteen years in a bookstore where, no doubt, he had access to the works of Donnelly, Steiner, Blavatsky and others[p158].>Over many years, his readings have frequently employed terminology and phrases from identifiable theosophical and other sources, a fact which cannot be ignored.<

His Reading 364-1(e) reveals quite clearly that he was acquainted with theosophical literature as well as other works of fiction such as A Dweller on Two Planets. It is, therefore, a clear possibility that this familiarity may have influenced his subconscious and his later prognostications.

Some of those ‘readings’ related to Atlantis and have been published in various books and websites, while in a separate volume, Edgar Cayce on Atlantis [0917] by his youngest son Edgar Evans Cayce contains all relevant utterances. The entire book is now available online(l).

He is most famously known for his claim that Atlantis would rise again in 1968 or 1969. Dr Mason Valentine discovered the so-called Bimini Road.  A suggestion that this underwater feature had been known to members of A.R.E., years before its ‘discovery’, has been made by Picknett & Prince in The Stargate Conspiracy[705].

K. Paul Johnson has written Edgar Cayce in Context[690], a well-balanced book that investigates in detail Cayce and his prognostications. In 1922, Cayce gave a lecture to the Birmingham Theosophical Society. Johnson relates how one Arthur Lammers, a theosophist, stayed with Cayce in 1923>for several weeks<, during which sojourn, it appears that Theosophy was extensively discussed. Around the same time, Cayce was developing a friendship with one Morton Blumenthal, also an ardent theosophist. Coincidentally, it was in 1923 that some of Cayce’s ‘readings’ began to display great similarities with some of the views expressed in Madame Blavatsky’s ‘revelations’. A further interesting fact is that Alexander Strath-Gordon met Edgar Cayce on a number of occasions in the 1920s prompting speculation that he may have ‘influenced’ some of Cayce’s Atlantis readings, an idea that must be considered a possibility.

With all this technology at their disposal, it is incredible that they could have lost a war with anyone, particularly the relatively primitive Athenians. The 17th-century fictional work of Sir Francis Bacon, The New Atlantis, contains many references to advanced technology not realised until the last century. An encounter with this widely available work could easily have coloured any ‘readings’ while in a trance.  Therefore, it would appear that there is sufficient evidence to suggest the possibility of ‘contamination’ of Cayce’s subconscious to throw doubt on the possible value of any of his ’readings’, without impugning the honesty of Edgar Cayce himself. Since the much-quoted prophecy of ‘Atlantis rising’ in the late ’60s is quite possibly the result of such contamination, it cannot be considered as evidence of anything. The Bimini Road itself is still the subject of controversy.

Michael Mandeville published three volumes on the life and work of Cayce. He calculated that Cayce’s accuracy is consistently within an 85%-92% range. In an article published in Atlantis Rising magazine(m) he is quoted to have said that “Given the general accuracy of Cayce’s statements and the decisiveness with which his scenario for the period can be shown to be on target there is little reason to doubt that a catastrophic shift (25-27 degrees) in the location of the poles will occur during the period 2000-2001. I personally believe it will most likely occur in the year 2009.”  Now (2022), many uneventful years later I think a comment is unnecessary.

There is also the report that David Wilcock, the conspiracy theorist, claimed to be the reincarnation of Edgar Cayce and wished to have a position in A.R.E., where he would also offer ‘readings’. He was questioned by Cayce’s son and grandson “for a little over an hour and quickly realized that he couldn’t answer a single question. They felt he was full of crap within minutes but to give him a fair chance they entertained him by asking him the questions that Cayce prepared while still alive to test the people who would come forward claiming to be his reincarnation.”(i) This daft idea was given further promotion by Wynn Free in The Reincarnation of Edgar Cayce? [1678], which was written with Wilcock.

(a) Evidence of Atlantis (archive.org)