Francisco Cervantes de Salazar (1514-1575) was a Spanish academic who 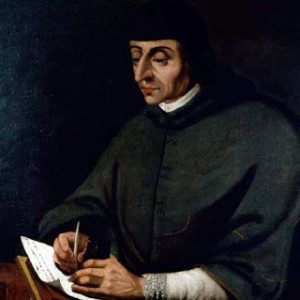 travelled to Mexico around 1550 where he was twice elected rector of the newly established University of Mexico.  In his Crónica de la Nueva España, he was a firm supporter of the idea of interpreting Plato’s 9,000 ‘years’ as lunar cycles, echoing the early statement of Eudoxus of Cnidos. His Crónica was not published until 1914[1517].

Stephen P. Kershaw has noted[1410.161]  that Salazar, along with many others, was strongly influenced by the opinions of Marsilio Ficino.

Factor Ten is a term I have employed to describe the fact that so many of the numbers in Plato’s Atlantis story, referring to time, physical dimensions and population all appear to be exaggerations, but would be more credible if reduced by a factor of ten. The date of 9600 BC for a war between Atlantis and Athens is not compatible with the Bronze Age description given by Plato, the dimensions of the canals in the city of Atlantis suggest a profligate degree of over-engineering and the size of the Atlantean army, as recorded, is comparable to the numerical strength of today’s USA’s military. On top of that, there is no archaeological evidence to support the idea of Athens having anything more than a Stone Age culture in the 10th millennium BC.

Dr A. G. Galanopoulos, who spent years excavating on Santorini, alsosuggested that all numbers in the thousands in Plato’s text were exaggerated, during translation, by a factor of ten. One can be forgiven for thinking that he was prompted to do this in order to match Atlantis to the timeframe of the Theran eruption, which occurred about 900 years before Solon’s Egyptian trip. However, J. V. Luce and Dorothy Vitaliano have refuted this idea.

A more frequently suggested explanation for the conflict between the 9,000 years given by Plato and the Bronze Age backdrop is that a lunar rather than a solar calendar was utilised by the Egyptian priests which would bring the two elements more into phase. So perhaps ‘Factor Twelve’ might be a more appropriate appellation.

Eudoxus of Cnidos (c.408-355 BC) who also studied astronomy with the priests of Heliopolis in Greece was one of the first to suggest that the Ancient Egyptians used lunar cycles to measure time. The idea was later endorsed by the Egyptian priest Manetho, Plutarch and Diodorus Siculus. Centuries later, Francisco Cervantes de Salazar (1514-1575) in his Crónica de la Nueva España[1517] he was a firm supporter of the idea of interpreting Plato’s 9,000 ‘years’ as lunar cycles, echoing the earlier statement of Eudoxus. A year later Olof Rudbeck proposed the same explanation.

However, while the substitution of solar years with lunar cycles would give a date for the Atlantean war that is more compatible with conventional archaeology, it still leaves the apparently inflated dimensions and military numbers recorded by Plato, unexplained. Since all of Plato’s numbers, in the Atlantis narrative appear to be overstated by a similar amount  it would seem appropriate to invoke the application of Occam’s Razor(c), which leads to an exaggeration by a factor of ten as the most likely explanation!

The use of lunar rather than solar units might explain the unrealistic ages ascribed to biblical characters such as Adam, Methuselah, or Noah although close study does not address all the difficulties. Similar problems exist with the length of the reign of individual  Sumerian kings. My belief is that a common explanation will eventually be found to rationalise both sets of anomalies. The answer will probably include the application of the Sumerian use of a numeric base of 60, coupled with lunar, solar and the Egyptian use of three seasonal ‘years’ per solar year. Zoltán Simon has claimed that the ages of the patriarchs were calculated using 90-day ‘years’[0549.7].

A number of suggestions have been put forward to explain how Plato’s exaggerated numbers came to be. Georgeos Diaz-Montexanocontends that it was not any confusion over hieroglyphics that led to the a tenfold exaggeration of numbers but the fact that in the spoken language of the Egyptians 100 and 1000 can be easily confused.

What may be of relevance is the fact that the Cretan scripts known as Linear A and Linear B use similar numbering signs. The number 100 is designated by a circle whereas 1000 is a circle with four nipples known as excrescences at the cardinal points. Both James Mavor and Rodney Castleden have advocated the idea that it was a misreading of these Minoan numerals that led to Plato recording hundreds as ‘thousands’.

Another reason for considering a factor ten error in Plato’s numbers may be drawn from the Chicago Demotic Dictionary, which has been developed over the past three decades at the Oriental Institute of the University of Chicago. It is edited by Professor Janet H. Johnson and is concerned with the ancient Egyptian cursive script in use from circa 650 BC, which is around the time of Solon, until the 5th century AD. Their website reveals that the cursive numerals for hundreds only differ from thousands by having longer tails(b) . I note that Johnson also records “that thousands sometimes had longer tails than expected”(p.23). This offers another credible explanation for how a transcription error could increase numbers by a factor of ten, which would bring Plato’s dates into conformity with other details in his Atlantis story, namely the Bronze Age milieu so clearly described there.

I also note that the Greeks had no zero or decimal point in their number system, making this kind of tenfold mistake quite a credible one(a). 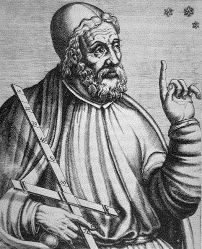