Kukulcan was the ‘feathered serpent’ god of the Mayan religion. He also had a human form that 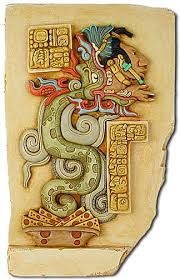 closely matches a description of a tall Caucasian, white-skinned, blue-eyed with blonde or silver hair. This similarity led to the European invaders being initially greeted as ‘gods’. There have been frequent suggestions that the original Kukulcan was a survivor of the demise of Atlantis, who managed to escape to Mesoamerica bringing the knowledge of the lost city to the Americas. However, it must be stressed that this is only conjecture. The Aztecs and Toltecs had a similar god, Quetzalcoatl, who had a matching description.

Pierre Honoré claimed that these ‘deities’ had arrived from Crete bringing with them their script. As the use of the Cretan Linear A & B had ceased by 1400 BC Honoré surmised that these transatlantic trips took place before that date!

Cuchulainn, an Achilles type hero in Irish mythology, has also been speculatively linked with Kukulcan because of the name similarity, an idea that has never had any scholarly support.>So it was no surprise that the unreliable Xavier Séguin supported this silly idea(a). Even Philip Gardiner seems to have been seduced by this linkage, noting in The Serpent Grail “that the Irish have a Celtic god-hero named Cuchulainn, which is too similar to the Mayan Kukulcan to be mere coincidence.”<

Mexico, according to the most recent evidence has pushed back the arrival date of the first people to the southern regions of the country to around 30,000 BC(e).

In Frank Joseph’s Discovering the Mysteries of Ancient America [934.217] a chapter by Kenneth Caroli has offered evidence that Olmec Mexico was the Land of Punt in Egyptian legend.

Clyde Winters has published his views that the Olmecs were descendants of Atlanteans who came from Libya in North Africa.   However, another Afrocentrist Paul Barton claims(c) that the Olmecs came from the Mende people of West Africa who are now one of the principal ethnic groups of Sierra Leone.

>Philip Gardiner has written a short article(g) in which he suggests America held the land of Atlantis, being the only large landmass beyond Gibraltar, where he believes Plato’s ‘Pillars of Heracles’ were located. Based on several factors including linguistics, he favours Mexico as the location of Plato’s lost land!(f)<

A Mexican engineer, Eduardo Robles y Gutierrez, while working in Vera Cruz, discovered the foundations of an ancient city about 30 miles from the coast, in and near what is now the jungle-covered region of San Lorenzo Tenochtitlán. He has identified that ancient city, with its concentric channels lined with high banks, as had Plato’s Atlantis. The site had been pillaged by the Spanish who consigned considerable treasure back to Spain. His investigations were also published in Mexico as La Atlántida Está en México [480].

A Mexican website(b) informs us that there is a village called ‘Atlantis’ in the Municipality of Cacahoatán (State of Chiapas). It has 8 people and is at a height of 550 meters.