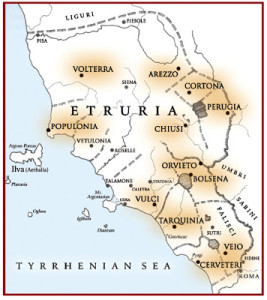 Stefan Anitei supports an Anatolian, or more specifically a Lydian, origin for the Etruscans, citing a “ A recent (2007) DNA analysis showed that (the Bos Taurus) cattle in central Italy seem indeed to have originated in modern Turkey and Middle East. As there is no link between these cattle and others from other European regions, they must have entered the peninsula by sea.” (n).

The site of the ancient city of Chiusi has been assumed by some to be the location of Clusium, the capital of the Etruscan king, Lars Porsena. This suggestion is based on the fact that the two names mean the same, namely ‘closed’. However, Giuseppe Centauro believes that he has found the real Clusium near Florence where he identified two concentric walls about 10 miles in circumference. The extensive walls have resonances with Plato’s description of Atlantis. If he is correct, Clusium may at one time have been the biggest city in Italy(f). Centauro is currently seeking permission to excavate there.

Another mystery relating to the Etruscans concerns an Egyptian mummy, which was bought in Alexandria and brought to Europe in the mid-19th century. When it was eventually unwrapped Etruscan writing was discovered on the linen!(q)(r)

The controversial Italian researcher, Dr. Mario Gattoni Celli, writing in the 1960’s proposed that the Etruscans had voyaged to South America, basing his opinion on linguistic and other cultural similarities. This view is apparently supported by Diodorus Siculus (History, Book V, 19+) who refers to the ‘Tyrrhenians’ setting up a colony on an island, with navigable rivers, at a great distance from the inhabited world(c). Adding some confusion to this is the claim that Old World languages had migrated FROM the Americas!!(d) Alf Bajocco wrote a piece in Sykes’ Atlantis magazine on Celli’s ideas(c).

David Childress wrote an interesting article(c) on what little is known about the origin of the Olmecs in the 2007 Sept/Oct. issue of Atlantis Rising magazine. This was one of a number of promotional pieces(e) for his book The Mystery of the Olmecs[1034] published earlier that year. In early 2014, Frank Johnson published a lengthy paper(f) debunking Childress’ Olmec book, with fyrther criticism from Jason Colavito following shortly afterwards(g). 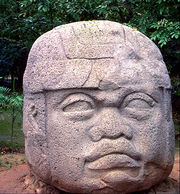 At the end of the 17th century a former Jesuit, Don Carlos de Sigüenza y Gongora who had befriended the son of Ixitilxochill was allegedly in possession of a remarkable collection of native manuscripts that had escaped the insane mass burnings of the 15th century. He believed that the earliest inhabitants of Mexico had come from Atlantis. The Olmecs who preceded the Toltecs were not identified until the 19th century.

Ivar Zapp & George Erikson use the stone spheres of Costa Rica as the starting point for their controversial book[244] on Atlantis, insisting on a connection between the stones and the Olmecs. Gene Matlock considers the Olmecs to be possible survivors from Atlantis[472] and Clyde Winters holds similar views and has supported them with his book[496]on the subject. In the same book[p.13] he offers Libya as the home of Atlantis, while elsewhere Matlock suggested(d) that the Olmecs were Turkish!

However, afrocentrist, Paul Barton, claims(m) that the Olmecs came from the Mende people of West Africa who are now one of the principal ethnic groups of Sierra Leone. Alessandro Demontis, who is something of a Zecharia Sitchin apologist, has written a short paper(r) on the leading proponents of the concept of an African origin for the Olmecs and argues that the academic background of many of them demands greater consideration of their viewpoint. Demontis thinks that to simply dismiss them as pseudoscientists is unwarranted.

The Negroid features that are clearly to be seen on some of the Olmec carvings are probably evidence of an ancient link with Africa and nothing more. On balance, I do not think that any credible case for identifying the Olmecs with Atlantis has yet been made. However, in my opinion, a far more convincing case has been made for linking the Chinese with the Olmecs(a)(b) and in that regard the book by Dr. H. Mike Xu, Origin of the Olmec Civilisation[698], is worth a read. In a similar manner Charlotte Harris Rees has compiled a vast collection of data linking the Chinese with America in her Secret Maps of the Ancient World[0697]. She devotes chapter 4 to the Olmecs. Jacques Gossart, has also reviewed(l) the evidence for the Chinese ancestry of the Olmecs. R.A. Jairazbhoy proposed in his book Ancient Egyptians and Chinese in America[992] that as well as Chinese, there are also Semitic, Egyptian and African traces to be found among the Olmecs.

Many Mormons believe that the Olmecs were the Jaredites who are only referred to in their Book of Ether. This idea has been developed in a short Kindle book by John Dreha[1377].

The most extreme theory regarding the Olmecs that I have found, is the claim that they were astronauts. This idea was expressed(h) by Xavier Séguin, quoting US astronaut Gordon Cooper! However, I discovered Séguin to be unreliable when I found that he also quoted a fictional character, Professor Mortimer, from a work by the renowned writer, Edgar P. Jacobs, as supposedly uttered by a real scientist(n), in relation to the Pillars of Heracles.

>Zechariah Sitchin in The Lost Realms [1718] claims that the Olmecs were culture bearers who arrived in America circa 3000 BC, which conflicts with date of 1500 BC proposed by conventional archaeology. Sitchin also quoted(s) Cooper’s heavily panned book, A Leap of Faith [1757] .

In 2006, it was announced(i) that a stone slab was discovered in the Mexican state of Vera Cruz, which appears to be the earliest known writing in the Americas and attributed to the Olmecs and dated to around 900 BC.<

May 2017 brought an interesting article(q), on the Ancient Origins website, outling the unique features of the Olmecs.