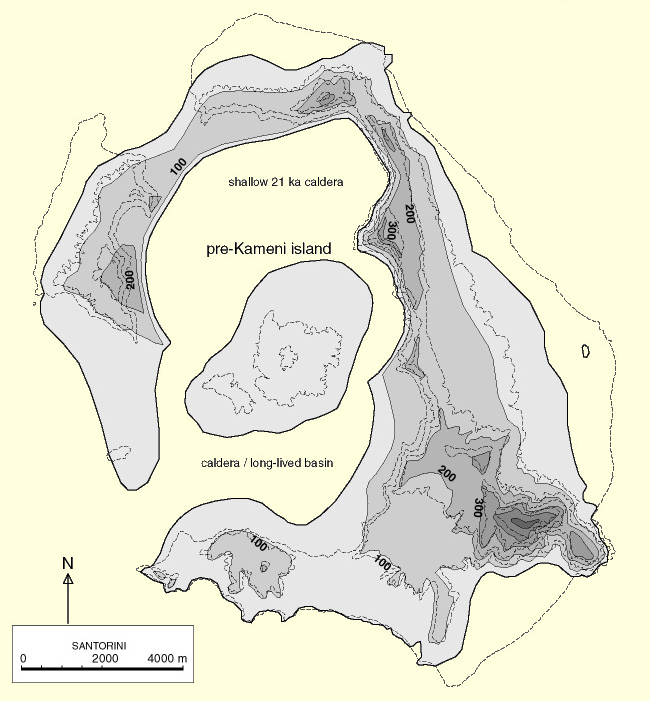 Although it exhibited low-level activity in 1939-41 and 1950-51, it was in 1926 when it last erupted violently, destroying many hundreds of buildings in less than a minute. Eruptions of similarity intensity occurred in 1650, 1707 and 1866. Although Thera is thought to have violently erupted around 54,000 & 18,500 BC, it was not until the middle of the sixteenth century BC that it provided what was probably the most powerful and destructive volcanic explosion in the Mediterranean during the Bronze Age. Although the exact date of this event is still the subject of some controversy, the most recent evidence(a) indicates a date around 1613 BC ±13years, while archaeologists are more supportive of a date circa 1500 BC.

Professor Floyd McCoy of the University of Hawaii has written and broadcast extensively on the matter of the Late Bronze Age eruption of Thera, including a paper delivered to the 2005 Atlantis Conference. In it, he noted that “New finds of tephra – ash and pumice – both on land and on the seafloor indicate a far larger eruption than previously assumed, suggesting a volume of at least 100 km3 of tephra (bulk volume) ejected, perhaps more. Such a volume ranks the eruption on the Volcanic Explosivity Index (VEI) at 7.0, equivalent or larger than the 1815 eruption of Tambora (‘the year without a summer’), ten times larger than the eruption of Krakatau in 1883, and approximately 100 times that of Mt. St. Helens in 1980.”[629.311]

The 1500 BC date was supported by David A. Warburton who edited the Acts of the Minoan Eruption Chronology Workshop in 2007(af). The workshop provided a good overview of the Theran eruption dating debates, Warburton’s comments are to be found in the Epilogue.

There was a series of eruptions that ended with a final enormous explosion that has been linked to the ending of the Minoan civilisation on Crete, the Plagues of Egypt and agricultural failures throughout the Eastern Mediterranean. For a geologist’s view of the island’s dramatic history, Walter Friedrich’s book[428]is hard to beat. His book supports a 1640 BC date for the eruption although he has subsequently revised this to 1613 BC. Sturt W. Manning supports[957] a 1628 BC date and Mike Baillie has offered dendrochronological evidence for a 1628 BC eruption date at the 2011 Quantavolution conference in Athens(j). This converges with McCoy’s date above. However, the dating of the eruption continues to be controversial as this December 2012 link(i)demonstrates.  At the heart of the problem is that acceptance of an early 17th century BC date for the event conflicts with established Egyptian chronology. While the exact year of the eruption continues to be debated, there is now scientific evidence that it occurred in early summer(s).

In August 2018, an interdisciplinary group led by dendrochronologist Charlotte L. Pearson published a paper(ab)(ad), which concluded that the eruption of Thera took place in the 16th century BC. This conclusion was the result of using a combination of ‘dendro’ along with high-resolution radiocarbon dating methods. In April 2020, a new report in the journal Proceedings of the National Academy of Sciences explained how a new study of “the wood of an ancient grove of juniper trees, which suggested that the volcano blew its top around the year 1560 B.C.”(ae)

October 2018 saw further evidence for an early 16th century BC date for the eruption emerge after the radiocarbon dating of some olive wood found on Therasia, one of the Santorini island groups (z). The same month saw the publication of a paper on the ResearchGate(aa)  website dating the event to 1727-1600 BC!

William Austin, an American researcher, offers, with great insistence, the precise date of 1612 BC for the eruption of Thera, in a lengthy paper that begins with an open letter to Manfred Bietak and Sturt Manning. This is a carefully thought-out argument and useful addition to the literature on the subject(ap).

After the eruption, we learn from Herodotus that Thera was resettled in the thirteenth century  BC by the Phoenicians and around a century later by the Dorians(am).

The doctoral thesis of Dr David Sewell explores the cultural effects of the Theran eruption and can be read online(h).

Many centuries later the volcanic ash deposited by the Theran eruption was used in huge quantities to manufacture cement for the construction of the Suez Canal. It was during the mining of this material that workmen encountered large stone blocks under the layers of pumice, indicating buildings of great age.

Luana Monte has written a rather ‘forced’ argument in which she claims that Thera can be identified as biblical Tarshish(ac).

It is claimed by many that a garbled Egyptian description of this devastating event was the basis for the story of the destruction of Atlantis. Louis Figuier was the first, in 1872, to publicly link the demise of Atlantis with the explosion on Thera. Opponents of this theory counter it by pointing out that Plato describes the inundation of an island much larger than Santorini or Crete, located in the Atlantic following an earthquake, not a volcanic eruption many thousands of years earlier. Various attempts have been made to reconcile this Minoan Hypothesis and its obvious inconsistencies with Plato’s text. They are discussed separately under

It was announced at the end of February 2010 that the BBC was about to air a dramatisation of the Theran disaster as well as a documentary on the eruption and its influence on the development of Plato’s story of Atlantis. June 2010 saw the historian, Bettany Hughes, front a disappointing BBC Timewatch Special, which also promoted the idea of the eruption on Thera as the inspiration for Plato’s story of Atlantis. The material introduced as evidence was highly selective and, for me, unconvincing. A few parallels between Thera and Plato’s description were trotted out, while the more numerous differences were ignored!

Dr Dora Constantinidis who studied under Prof. Christos Doumas delivered a lecture in Melbourne on May 29th 2014 with the inviting title of Unravelling the Atlantis Myth at Akrotiri. However, the primary purpose of the talk was not to advance our knowledge of Atlantis but to encourage the sale of Bronze Age-inspired merchandise(p). Nevertheless, in late 2020, one commentator did speculate that Akrotiri may originally have been Atlantis!(aj)

It is noteworthy that “Unlike Pompeii, no human remains have been found at Akrotiri, and only one gold object was found on the site, suggesting that the Minoans performed an orderly evacuation before the eruption, and they had time to take their valuables before they fled.”(ak) 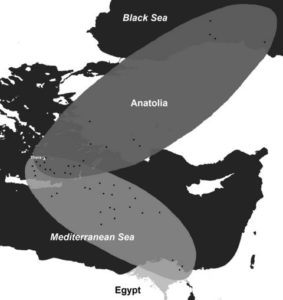 Initially, it was thought that the collapse of the Theran caldera generated very destructive tsunamis, but new studies have concluded(w) that instead of that it was the violent entry of pyroclastic flows into the sea that triggered the tsunamis. Dale Dominey-Howes has published a paper suggesting that some claims relating to tsunamis generated by the Theran eruption(s) are exaggerations. However, a 2022 report indicates that a series of four tsunamis resulting from the eruption hit the Turkish coast at  Çesme-Baglararasi, with one known fatality.(ao) 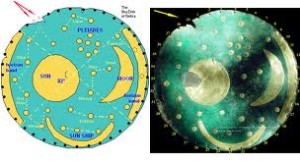 to have resulted from the volcanic ash generated by the eruption blotting out the sun for up to 25 years. It is thought that the Disk had been used to synchronise the lunar and solar calendars(l) and when this was no longer possible the Disk was buried as some form of offering. A contrary view is offered elsewhere on the Internet(m), as well as further controversy(t) led by Peter Schauer from the University of Regensburg.

2020 brought further debate with the claim, in a lengthy paper, that the date of the Disk should be brought forward to the 1st millennium BC(ag). This was followed by a shorter but vehement rebuttal(ah)(al).

In December 2020, the Discovery Channel aired a new documentary, which attempted to revive the Minoan Hypothesis, placing Atlantis on today’s Santorini. This recycled claim adds little that is new and has been taken up by several media outlets(ai), repeating an old error that claims that Plato said that Atlantis was destroyed by a volcanic eruption, when in fact he clearly states that it was the result of an earthquake.

Paul Dunbavin in Prehistory Papers [1758] discusses the Minoan Hypothesis and the extent to which it is inconsistent with the details provided by Plato. Despite the support from some academics for the idea that the story of Atlantis is linked to the Theran eruption, Dunbavin reiterates that “whenever you find a conflict between the opinion of a modern expert and that given in an ancient text then you should always prefer the source closest to the events.” [p160]

(g) Sodom & Gomorrah & The Age of Thera and the Volcano Santorini (archive.org)

(af) (99+) (PDF) Manning, S.W. 2009. Beyond the Santorini eruption: some notes on dating the Late Minoan IB period on Crete, and implications for Cretan-Egyptian relations in the 15th century BC (and especially LMII). In D.A. Warburton (ed.), Time’s Up! Dating the Minoan eruption of Santorini. Acts of the Minoan Eruption Chronology Workshop, Sandbjerg November 2007 initiated by Jan Heinemeier & Walter L. Friedrich: 207-226. Monographs of the Danish Institute at Athens Volume 10. Athens: The Danish Institute at Athens. | Sturt Manning – Academia.edu

(aj) The Prehistoric Buried City of Akrotiri – Discovered in 1860 (thevintagenews.com)