Cro–Magnon Man, who emerged around 37,000 years ago and disappeared at the end of the Last Ice Age. He is often described as having a dome-shaped cranium and broad forehead and a brain capacity of 1,600 cc, which is greater than modern man. His skull has thick eyebrow projections and a bony protrusion at the back that is characteristic of both Neanderthal man and Homo erectus. Blavatsky(c), Sepehr(d) along with a number of investigators(e) have suggested that they may have been the original Atlanteans. They have pointed to the physical traits listed above together with blood grouping and linguistic similarities to be found in the same regions of Western Europe and North Africa.

Robert John Langdon also claims that “Cro-Magnon/Atlanteans colonised America” based on a study of blood group distribution(b). R. Cedric Leonard is another supporter of the idea of Cro-Magnons in America(h), citing the work of Dennis Stanford & Bruce Bradley [1516]. Leonard offered a more complex view of Cro-Magnons on his now-closed website, but excerpts are available elsewhere(j).

On the basis of skull shape, William Howells[268] and Bertil Lundman[269] have supported this view. The regions that were home to Cro-Magnon Man, in Upper Paleolithic times, were comparable with those occupied by their latter-day successors such as the now-extinct Guanches of the Canaries and the Basques.

R. Cedric Leonard is probably the best-known modern proponent of the Atlantean Cro-Magnon idea(f), he refers to the work of Oliviera Martins[270], who in the 1930s, pointed out that many of the Cro-Magnon people have given themselves distinguishing names with the suffix ’tani’ from the Mauritani of North Africa to the Bretani of Brittany and Britain. Leonard also insists that an analysis of the languages of these groups of people points to a relationship with each other while being quite different from the other languages of Europe or the Near East. He thinks that it is quite possible that these ancient languages date back to the cultures of the Ice Age. Leonard also refers to what he calls “an anomalous Cro-Magnon/Atlantis outpost” in northern Palestine(a).

Alexander Marshack (1918-2004) was an American journalist turned archaeologist, who, in the 1970s, offered evidence[1633] that markings on a number of bones from the Upper Paleolithic were used as lunar calendars to mark the passage of time. Similar markings have been identified on the painted walls of the famous Cro-Magnon Lascaux caves in France(g).

At the Paleolithic site at Little Salt Spring in Florida an antler incised with 28 notches was reported in 2011(i). Commenting on this, Caleb Everett has proposed [1776.30] that “In fact the marks suggest that this piece of antler is the oldest known New World artifact used for calendrical purposes.” If confirmed, it will go some way towards vindicating the much-criticised theories of Marshack!

Jason Colavito has unearthed late 19th-century attempts to link the Cro-Magnons with the Nephilim of the Bible(k).

The possibility of a Cro-Magnon connection with Atlantis has inspired an American writer, Ernest Warner, to produce a number of novels based on this concept starting with The Cro-Magnon Archipelago: Atlantis Reborn, in 2021. 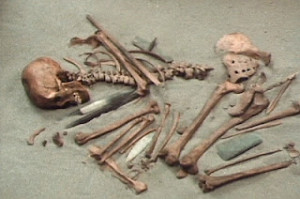