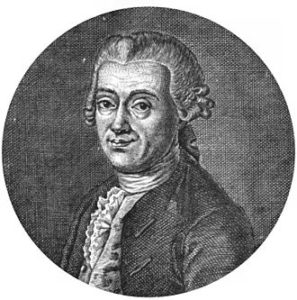 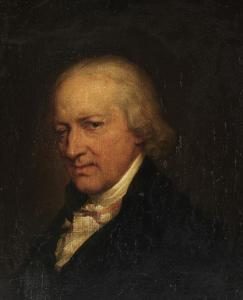 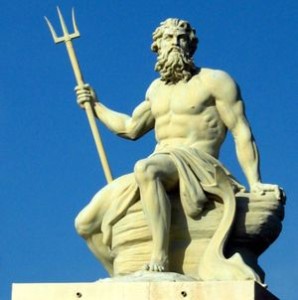 Poseidon was one of the twelve Olympians of ancient Greek mythology. He was also the Greek god of the sea who was given the island of Atlantis as his realm. The Romans later knew Poseidon as Neptune. Herodotus (II.50.2) claimed that the Greek gods were imported from Egypt with a few exceptions including Poseidon. Some have suggested that the ancient Egyptian god Sobek was the equivalent of Poseidon, but the connection seems rather tenuous.

Some writers have suggested that Noah was to be equated with Poseidon. His symbol was a trident.

*Poseidon is also credited with having been the first to tame horses.* Others, such as Nienhuis, have equated Poseidon with Sidon referred to in Genesis 10:15.

The Phoenician sea god Melqart is frequently seen as the son of Poseidon whereas others, such as Jonas Bergman, consider them to be identical. The Nordic sea god Aegir is also seen as a mirror of Poseidon. In Portugal, Saint Bartholomew is considered a Christianised Poseidon, where statues of him are similar to those of Poseidon including a trident.

The Celtic god of the sea was known as Manannán Mac Lir who is frequently associated with the Isle of Man in the Irish Sea.

*When the Greek gods divided the world among themselves, Poseidon received Atlantis as his share. He fell in love with a mortal, Clieto, who bore him five sets of twin boys, of whom Atlas was the first born and primus inter pares. Atlantis was then shared between them.

In December 2017, Anton Mifsud, Malta’s leading Atlantologist, published an intriguing suggestion(a) , when he pointed out that on the ceiling of the Sistine Chapel, painted by Neo-Platonist Michelangelo, something odd can be perceived in the central panel, known as The Creation of Adam. There, we find ‘god’ surrounded by five pairs of flightless ‘cherubs’. This is reminiscent of Poseidon’s five pairs of twin sons. Atlantis. However, Christian iconography invariably shows cherubs with wings, so it begs the question; why this departure from the norm? Mifsud contends that together with other aspects of the fresco, this depiction is closer to Plato’s ‘god’, Poseidon, than that of the Mosaic creator in Genesis!

The Exploded Planet Hypothesis (EPH) has its origins in the 18th century when the regular spacing of the orbits of the then known six planets, with the glaring exception of the apparently empty theoretical position between Mars and Jupiter, led to the formulation of the Titius-Bode Law. The discovery of Neptune in 1846 in a position that did not conform to the rule of Titius-Bode, led to its gradual abandonment. However, the discovery of Pluto in the 1930’s brought the ‘Law’ back into consideration as Pluto was in the position that should have been occupied by Neptune. The exceptions to the Titius-Bode law are the lack of a planet where the Asteroid Belt is and the position of Neptune. In 2003, a further planet, Sedna, was discovered at a distance of 8 billion miles from the sun, as predicted by Doug Yurchey on the Internet in 2002. Since then, further bodies have been discovered in the outer region of our solar system, one of which was larger than Pluto.

As you will see below, a credible explanation for the Asteroid Belt is on offer and if correct, it means that now ten of the eleven planetary orbits in our Solar System correspond with the prediction of Titius-Bode. Statistically, this must have some significance. Therefore, in order to reinstate the Titius-Bode ‘law’ back on the statute book it is important to find an acceptable explanation for Neptune’s orbit.

Particular planets with satellite systems also confirm Titius-Bode, such as the principal satellites of Jupiter, Saturn and Uranus. Furthermore, even at this early stage in our investigation of extrasolar planetary systems, one, 55 Cancri, has at least four planets whose orbits appear to follow a similar pattern(c).

The 19th century saw the discovery of more asteroids in the orbit where a planet would have been expected. As early as 1802 the suggestion that an exploded planet had originally occupied this position was considered. As more asteroids were discovered the idea gained support. However, there remained one major problem with the theory, namely, that the total mass of the known asteroids would not constitute one thousandth of our earth. So where did all the matter go?

Donald W. Patten (1929-2014) has made a study of Martian craters and discovered a number of anomalies. One such detail is that 93% of all craters 20 miles or greater in diameter are in one hemisphere, which led Patten to conclude that “Mars received about 86% of its craters in one catastrophic day”(e)(f) and that the other 14% are spread equally on both hemispheres and over all other time. The suggestion being that these craters were possibly caused by the disintegration of large asteroid or small planet!

Tom Van Flandern (1940-2009), the leading exponent of the EPH, explained; ‘Consider what would happen if the Earth exploded today. Surface and crustal rock would shatter and fragment, but remain rocks. However, rocks from depths greater than 40 km are under so much pressure at high temperature that if suddenly released into a vacuum, such rocks would vaporise. As a consequence, over 99% of the Earth’s total mass would vaporise in an explosion, with only its low-pressure crustal and upper mantle layers surviving’. This explanation would clearly account for the low total mass of the objects in the Asteroid Belt. Van Flandern has expanded on his theory in what many consider a landmark book, Dark Matter, Missing Planets and New Comets[293].

Van Flandern ascribes a date for this planetary explosion that is well before man existed on Earth. However, many of our ancient myths have been interpreted as describing celestial events in the vicinity of Earth that had a direct physical effect on our planet. Immanuel Velikovsky wrote extensively on these ancient tales and concluded that they referred to close encounters between Earth and Mars and separately with Venus.

The date of the Asteroid Belt collision or explosion was estimated in 2015 to be 470 million years ago after the identification of twin impact craters in Sweden(d).

If Titius-Bode is valid and Velikovsky’s planetary encounters real, we need to explain how they left their orbits in the first place and then must explain how they returned to their original positions. Ralph E. Juergens, an American engineer, supports Velikovsky with the idea that electromagnetic and electrostatic forces and not conventional celestial mechanics alone were responsible for the cosmic encounters witnessed and recorded by our ancestors(b). My personal hunch is that Van Flandern is correct about the explosion of a planet but wrong about the date of the occurrence.

The EPH may have a bearing on the demise of Atlantis in the shape of an asteroidal collision with Earth that in turn precipitated the ending of the last Ice Age and the consequential flooding of large areas of exposed land.

Alan Alford has a different view in The Atlantis Secret [009] in which he attempts to prove that Atlantis originated in an ancient myth concerning an exploding planet. However, this would require an event that occurred within the experience of speaking man for it to have been passed on in the form of myth.

Arnobius of Sicca  (now El Kef in Tunisia) was a 4th century AD Christian bishop, who told in one of his sermons, Adversus Gentes (Book I)[1347],  of the catastrophes

that have previously destroyed human civilization, that “ten thousand years ago, a vast number of men burst forth from the island which is called Atlantis of Neptune, as Plato tells us, and utterly ruined and blotted out countless nations.” Again, the date given by Arnobius turns out to be precisely the one of 11600 BC. Though Arnobius’ account seems to be based on that of Plato, he appears to have had access to sources now lost that apparently confirmed Plato’s disclosure in an independent way.

Stephen P. Kershaw in The Search for Atlantis [1585.147] has interpreted this brief contribution from Arnobius as merely a condemnation of uncontrolled imperialism.