Two Atlantises have been proposed by some commentators in order to explain some of the difficulties in Plato’s tex t. While the concept has been adopted in principle, the locations chosen vary.

Lewis Spence was probably the first to suggest the idea, followed by D. Duvillé and>Denis Saurat while more recently Jürgen Hepke has followed suit, suggesting that the first Atlantis was situated in the Bermuda Triangle and was destroyed around 9500 BC(a) and the second in the Mediterranean region which met its end circa 1250 BC(b)!<

The Russian Atlantologist Vladimir Scherbakov has promoted the idea of one Atlantis in the Atlantic and a second one incorporating major cities in the Eastern Mediterranean. He believed that migrants from the Atlantic original had peopled the second one.

It is clear that Plato describes two Atlantises separated by both time and geography. One was the Stone Age culture, briefly referred to by Plato and the other was the Bronze Age society that he describes in much greater detail. This apparent contradiction is easily explained if we accept that the original Atlantis was preliterate and in common with all very ancient peoples their achievements would have been clouded by the mists of time before committed to writing. Not unreasonably, to make up for a lack of detail, Plato would have overlaid the oral tradition with the attributes of an advanced civilisation of his own era, something that his audience could identify with. Such a literary device would have been within the bounds of artistic licence at that period.

Pauwels & Bergier in their book, The Morning of the Magicians[910], also proposed two Atlantises, an earlier one at Tiwanaku in the Andes and a later one in the Atlantic destroyed by “waters from the north”, recorded as Noah’s Flood in the Bible!

Not content with two Atlantises, Diego Marin, Ivan Minella & Erik Schievenin went one further in 2013, when they proposed three Atlantises in their book The Three Ages of Atlantis[972].

Ethiopia as a geographical area had very different meanings depending on the period in which it was used. Frank Joseph stated[102] that until the 1st century BC. Ethiopia referred to the Atlantic coast of North Africa. Zhirov claimed that ‘Ethiopia’ simply meant a land inhabited by dark-skinned people[0458.98]. 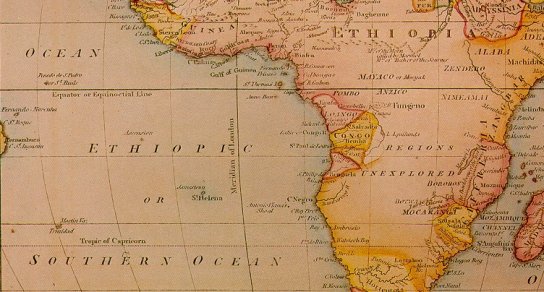 Col. Alexander Braghine believed[156] in a connection between the ancient Ethiopians and Atlantis. The map above dating from 1650 and published in a book[292] by J.A. Rogers shows the South Atlantic as ‘The Ethiopic Ocean’, while the entire Central Africa is named Ethiopia. We can only conclude that the location of the original Ethiopia is nearly as difficult to pinpoint as the location of Atlantis itself.

>In 2020, African author George Mac D Lynch published Ethiopia is Atlantis and has made it freely available on the Internet Archive.(a) Lynch has been greatly influenced by the writings of Ignatius Donnelly, Drusilla Dunjee Houston and Gerald Massey. He claims Ethiopia as the cradle of civilisation.<