The exact location of Ophir is the subject of continuing controversy. In broad terms the most popular regions suggested are, or have been, India(g) , Africa(f) and the Americas(a) , but they were not the only proposed locations, even Australia and the Solomon Islands were considered. Emilio Spedicato has opted for Tibet, where an ancient goldmine fits the bill, which he outlines in his paper entitled Ophir, It’s Location Unveiled.

There is also a claim that the Batanes Islands off the Northern Philippines held the site of Ophir(b) . Further west, Dhani Irwanto has claimed that Punt was also known as Ophir(d) and was situated on Sumatera (Sumatra) in Indonesia(c) . However, he went further and also located Atlantis in Indonesia in his book, Atlantis: The lost city is in Java Sea [1093]. His chosen site is just north of Bawean Island in the Java Sea.

However, Irwanto was not the first to link Atlantis with Ophir, Theodore L. Urban was the author of a paper  delivered to the Lancaster County Historical Society of Pennsylvania in 1897. In it, he denied that Atlantis had been completely destroyed and argued that the biblical Ophir was in fact Atlantis, suggesting that it had been located in the Americas, which explained the three years that the round trip took(e). 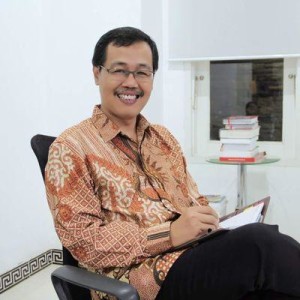 Irwanto also claims that the biblical Garden of Eden and the legendary island of Taprobane were situated on the island of Kilimantan. In an extensive online(b) article in November 2015, he identified the Indonesian island of Sumatra as the land of Punt, >which he thinks was also known as the Ophir referred to in the Old Testament (1 Kings 9.26 & 10.11).<

In June 2017, Irwanto published an illustrated paper(e) on Aurea Chersonesus, referred to by Ptolemy in his 2nd century Geographia . Irwanto has matched details in Ptolemy’s description with a place in western Sumatra called Tanjungemas renowned for its gold mines in the ancient times. 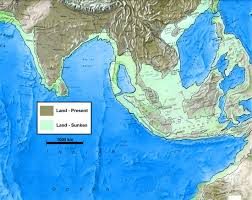 Sundaland is the name of a large biogeographical region of South East Asia, a large portion of which had been above sea level during the last Ice Age and later inundated as the glaciers retreated. The term was apparently first used[1629] in 1949 by R.W. van Bemmelen (1868-1941) and later by other authorities.

It is worth noting that it is now generally accepted that South East Asia was probably the entry point of modern humans from Africa. Human traces have been found in Papua New Guinea that have been dated to around 40,000 BC.

Some authors have specifically claimed a clear link between Sundaland and Plato’s Atlantis. The Sunda Sub-Oceanic Plain is large enough to match Plato’s description of Atlantis. Its topography, climate, flora and fauna together with aspects of local mythologies, all permit a convincing case to be made to support this idea.

C.W. Leadbeater (1854-1934) who was a prominent theosophist was perhaps the first to suggest a link between Atlantis and Indonesia in his book, The Occult History of Java [1094] , which is now available online(f).

Other investigators have written on the prehistory of the region of whom the best known is probably Stephen Oppenheimer who firmly locates the Garden of Eden in this region[004], although he makes little reference to Atlantis. More recently, Robert Schoch, in collaboration with Robert Aquinas McNally, wrote a book[455] in which they suggest that pyramid building may have had its origins in a civilisation that flourished on parts of Sundaland that are now submerged.

The first book to specifically identify Sundaland with Atlantis was written by Zia Abbas[001]. However, prior to its publication the Internet offered at least two sites that discussed in detail the case for Atlantis in South East Asia. William Lauritzen(a) and the late Professor Arysio Nunes dos Santos(b) developed extensive websites. Lauritzen has also written an e-book that is available from his site, while Santos developed his views on an Asian Atlantis in another recent book[320]. Dr Sunil Prasannan has an interesting essay on Graham Hancock’s website(c). A more esoteric site(d) also offers support for the Sundaland theory.

An Indonesian researcher, Panji R. Hadinoto, has published on his website(e) a 32 point checklist purporting to ‘prove’ that Atlantis was located on Sundaland. Unfortunately, this checklist is not original but copied from the work of Professor dos Santos.

April 2015 saw further support for an Indonesian Atlantis with the publication of a book[1093] by hydraulic engineer, Dhani Irwanto, who endeavours to identify features of the lost city with details in Plato’s account with a site in the Java Sea off the coast of the island of Kilmantan. He has now published a YouTube video in support of his theory(h).

In 2019, Irwanto published two new books, the first, Sundaland: Tracing the Cradle of Civilisations [1618], in which he offers a compelling case for considering emigrants from a submerging Sundaland as bringers of embryonic civilisation to other lands, where it flourished and developed local variants. It crossed my mind that Irwanto’s contention might explain the origins of the likes of the Sumerian civilisation, among others, which have never been satisfactorily settled!

The second book, Land of Punt [1628], is another interesting offering in which the author suggests that Punt and the biblical Ophir can be equated with Atlantis, located in Sundaland. However, this idea conflicts with a growing consensus(k) that places Punt in the region Horn of Africa or across the Red Sea in Arabia.

A 2016 series of graphics shows the gradual inundation of Sundaland from 18,000 BC onwards(g).

Thorwald C. Franke has drawn attention(j) to a recent controversy in Malaya where historian Zaharah Sulaiman has claimed that the Malay set of mtDNA is 63,000 years old, dating back to a time long before the submergence of Sundaland. It seems that Sulaiman had built her claim on some of Oppenheimer’s writings. This veiled suggestion of some sort of racial superiority, through antiquity, was disputed locally.(i)

>Ahmad Yanuana Samantho published Atlantis Nusantara [1869] in 2015, which purports to build on the work of Arysio dos Santos with additional data that the author (or publisher) describes as ‘spectacular’. Unfortunately the 538-page book is only available in Indonesian. Nusantara is generally used to describe the Indonesian archipelago.<

Checklists have been published by a number of authors that compare the features of Plato’s Atlantis with that of their preferred location and that of other writers. While such lists can appear impressive they suffer from a number of defects. First the lists are drawn up arbitrarily(a) and frequently omit headings that may not suit the theory of its compiler, but might support a competing view. Secondly, another excuse for not including particular items is often done on the grounds that they were just modifications by Plato. Finally, since Plato’s text contains various ambiguities and contradictions, some list headings are capable of more than one interpretation, for example, the location of the Pillars of Heracles or the date of Atlantis’ destruction.

Finally, if the Atlantis narrative is accepted as a mixture of detail from more than one source, possibly separated by thousands of years, it is meaningless to include everything in a single list. An example of this might be where the clues to the location of the Atlantean capital might be based on a very ancient source but the description of its architecture may have been inspired by structures from a different location, possibly from Plato’s own experience. In such a case the two will never be discovered together.

The earliest list of details purporting to match specifics in Plato’s description of Atlantis with a particular theory came in the seventeenth century, when Olof Rudbeck assembled 102 ‘proofs’ that he believed associated Sweden with Atlantis.

In the case of Indonesia, Dos Santos drew up a 32-point checklist(b), which has now been adopted and expanded to 60 points(e) by Dhani Irwanto, who published Atlantis: The lost city is in Java Sea[1093] in 2015.

The Atlantis Conference of 2005 concluded with the drafting of a list of 24 criteria(f),  which must be met to qualify as Plato’s lost city. Jim Allen initially expanded this list to 34 points(a) and in December 2010 added a further 16 , bringing his new total up to 50 criteria(d), chosen with an obvious bias towards his own Bolivian theory.

The 2005 conference also led to the drafting of the Atlantis Research Charter, which although not a checklist in the sense that I have used it, does provide a rational set of guidelines for researchers to follow,  firmly rejecting pseudoscience, dogmatism and abuse for political or religious ends.

The most recent (2016) checklist from Philip Runggaldier, not unexpectedly, points to his chosen location of the Celtic Shelf rather than Minoan Crete as the location of Atlantis. Not, in my mind, a fair comparison.

My book, Joining the Dots, as far as I’m aware, raises for the first time in any detail, the obvious prerequisites for a successful invasion. Obviously Invaders require a powerful army, military intelligence (spies) and the ability to keep supply lines as short as possible. The latter demands that military expansionism is directed at neighbouring territories, a fact confirmed by the manner in which all ancient empires developed. However, when it comes to checklists the need for proximity is conveniently ignored as can be seen by its absence from the lists compiled by advocates of some of the more extreme Atlantis locations, such as, Antarctica, America or Indonesia. At least some Plato’s Atlantis identifiers can be linked with most proposed locations, but if they are not within ‘striking distance’ of ancient Athens, they cannot be Atlantis.