Mumba Chabu is a geologist at the University of Lubumbashi in the Democratic Republic of the Congo. He recently published a short paper(a) with the intriguing title of ‘Archaeological Prospects for Atlantis in Southern Africa’. He then proceeded to argue that as there was an atomic war between the Indus civilisation and Atlantis over an economic dispute, “it does not make economic sense for the ancient Indians to do business with a supposed island state in the middle of the Atlantic ocean and ‘fly over’ an entire mineral, agriculturally and resource rich continent the size of Africa.” I presume the inference to be drawn from that, is that Africa would have been a more likely trading partner and also the home of Atlantis! Proof? None.

Chabu also touches on the Minoan Hypothesis, without any firm conclusions

The exact location of Ophir is the subject of continuing controversy. In broad terms the most popular regions suggested are, or have been, India(g), Africa(f) and the Americas(a), but they were not the only proposed locations, even Australia and the Solomon Islands were considered. Emilio Spedicato has opted for Tibet, where an ancient goldmine fits the bill, which he outlines in his paper entitled Ophir, It’s Location Unveiled(h).

There is also a claim that the Batanes Islands off the Northern Philippines held the site of Ophir(b). Further west, Dhani Irwanto has claimed that Punt was also known as Ophir(d) and was situated on Sumatera (Sumatra) in Indonesia(c). However, he went further and also located Atlantis in Indonesia in his book, Atlantis: The lost city is in the Java Sea [1093]. His chosen site is just north of Bawean Island in the Java Sea.

However, Irwanto was not the first to link Atlantis with Ophir, Theodore L. Urban was the author of a paper delivered to the Lancaster County Historical Society of Pennsylvania in 1897. In it, he denied that Atlantis had been completely destroyed and argued that the biblical Ophir was in fact Atlantis, suggesting that it had been located in the Americas, which explained the three years that the round trip took(e).

>Jason Colavito has published articles written by Thomas Crawford Johnston in 1892(i) that he later developed into his 1913 book Did the Phoenicians Discover America [1902+] in which he places Ophir in America!<

(i) Phoenicians in America – JASON COLAVITO *

Sylvain Meinrad Xavier de Golbéry (1742-1822) was a French geographer and military engineer. He is best known for his account of his travels in western Africa in Fragmens d’un voyage en Afrique [1297] . His book was translated into English by W. Mudford with a new title of Travels in Africa[1298]. He refers to Atlantis in the Atlantic with the Azores and Canaries as ‘its shattered remains’[p.207] with a possible connection with the Atlantes of northwest Africa.

Canals are recognised as having been critical for the development of many ancient civilisations and are also evidence of the engineering capabilities of these early societies. Recent discoveries(a) in the Peruvian Andes revealed canals over 5,400 years old.

Canals in the capital city of Atlantis are described by Plato in great detail but with dimensions that are quite unrealistic. One possible explanation for this; the whole story is fiction and the dimensions were just pulled out of thin air. However, if Plato or anyone had been writing fiction you would expect such details to be closer to reality. In fact, Plato expresses incredulity at these dimensions but notes them as a record of Solon’s report. This adds weight to the theory that the numbers had been transcribed erroneously from the original Egyptian sources or that the units of measurements were misunderstood.

To my mind, the extent of the irrigation canals recorded by Plato would seem to suggest that the Plain of Atlantis was subject to a dry climate.

The dimensions might be that of a natural feature adapted to suit the needs of a fortified harbour. The latter idea was proposed and expanded on by Ulf Richter(e).>He also took issue with the dimensions of the canals as given by Solon/Plato and voiced his analysis on the now-defunct Atlantis Rising Forums – “In my opinion, it is absolutely incredible, even if the Atlanteans had our technology instead of the technology of their age (the time of horse-driven war chariots, of stone-shooters and slingers!) that they could have built such a deep canal! Plato was right when he doubted this information (Crit.118c), but he knew nothing about the construction of canals and therefore did not know, that they were not only incredible, but impossible from the technical point of view, and moreover absolutely unnecessary for the flow of water and for the draught of the ships.”(f)<

Extensive ancient canal systems have been identified in both North and South America. John Jensen has discovered one such network in the Louisiana region(a) but has had the good sense not to try to associate it with Atlantis. Jensen’s site also deals with canals in Mexico and Africa. His claim regarding the Louisiana canals has been challenged online(c) and as of March 2016, his own website is offline. However, in early 2017 Jensen published another paper on the Migration-Diffusion website(d) about ancient canals, which includes a reference to the ancient canals on the US Atlantic and Gulf coasts, also dated to the 6th millennium BC.

Further information regarding the Mexican pre-Colombian irrigation systems is available on the Ancient Origins website(b).

Peter James in opposing the idea of a Minoan explanation points out that no canal systems have been discovered on Crete or Thera.

Maurice Nguepe Taba II (1969- ) was born in Cameroon in Central Africa. He has studied in Germany and Canada and founded the 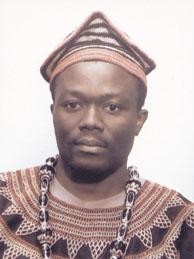 Institute of African Studies in Montreal, Quebec. He has written both fiction as well as non-fiction including Afrika als Atlantis (Africa as Atlantis) in which he considers the story of Atlantis as “the foundation of Greek colonial ideology” that was later reflected in the European colonialism that developed from the 16th century onwards. Apart from the political philosophy Nguepe also believes that Africa had been Atlantis, perhaps revealed by his association with the Frobenius Institut in Frankfurt’s J.W.Goethe University.

Hans Rudolf Stahel is possibly Swiss(a) and an architect by profession, he is also the author of a guide to Atlantis entitled Atlantis Illustrated [560]+, with a foreword by Isaac Asimov. While Stahel located Atlantis in the Atlantic, Asimov opted for the destruction of Thera as the inspiration for Plato’s story.

The illustrations are good but unfortunately are only in black and white. Stahel based all the designs and plans of Atlantis on Plato’s descriptions. His drawings, more than anything else, demonstrate the improbability of dimensions recorded by Plato. The consistent degree of over-engineering forces us to question the accuracy of Plato’s numbers and consider whether this perceived exaggeration is the result of an erroneous transcription of numerals or a misunderstanding of the units of measurement employed.

Stahel depicted Atlantis as a 77,000 square mile island, centred on the Azores with a chain of islands stretching from there to Newfoundland more or less in a straight line. He also envisages an Atlantean Empire stretching from parts of the west coast of America to include the Mississippi, Missouri and Ohio river basins, Central America and as far south as the Amazon basin. East of the capital he includes all of coastal Europe and the Mediterranean (except Greece), along the coast of north and west Africa, the Middle East and on into India. Imaginative if nothing else[p10]!

>Stahel is the only commentator that I have encountered who suggested that elephants were used in the construction of the magnificent buildings described by Plato. This would make sense as Stahel calculated that surrounding the city of Atlantis “the aggregate length of the walls was almost 50 miles; they were 50 feet broad and twice as high. To build them, and their gates and towers, was a feat as impressive as the construction of the canals. The quantity of stone required was roughly 27 times that used in an Egyptian pyramid.” [p94]<

The only other book attributed to H.R. Stahel is Die Pfahlbauer – Entstehung und Geschichte eines Pfahlbaudorfes[1527],  which deals with ancient European pile-dwellings that are comparable with the numerous crannogs of Ireland(b).