Alphabet of Atlantis, The

The Alphabet of Atlantis according to Ignatius Donnelly was the inspiration for the Phoenician alphabet. In fact, one of the objectives of Donnelly’s 1882 book was to prove “that the Phœnician alphabet, parent of all the European alphabets, was derived from an Atlantis alphabet, which was also conveyed from Atlantis to the Mayas of Central America.” (Pt.III chap.7)

>Orly Goldwasser is an Israeli professor of Egyptology, who controversially claims that “the alphabet was invented around 1840 BCE by illiterate Canaanite mining experts working in the Sinai site of Serabit el-Khadem.” She expands on this in Appendix B of Pharaoh in Canaan: The Untold Story [1790], which is available online(f).<

R. Cedric Leonard has explored this possibility in a series of articles(a) and concluded that the hypothesis has merit. However, the Phoenician ‘alphabet’ lacked vowel signs and so should perhaps be called a betadelt? It took the Greeks to introduce vowel symbols and give us a writing method superior to that of the Phoenicians and which, by extension, if we accept the views of Donnelly and Leonard, is more flexible than the Atlantean system. The earliest Indian symbol has been dated to the 9th century AD in Gwalior, however, the mathematician, Amir Aczel has now traced an earlier zero from the 7th century AD in Cambodia(c). Suggestions of even earlier dates are strongly disputed(e).

The imaginative William Scott-Elliot had a slightly different view which he expressed as follows; “It is probable that the earliest form of alphabet was hieroglyphic, “the writing of the Gods,” as the Egyptians called it, and that it developed later in Atlantis into the phonetic. It would be natural to assume that the Egyptians were an early colony from Atlantis (as they actually were) and that they carried away with them the primitive type of writing which has thus left its traces on both hemispheres, while the Phoenicians, who were a sea-going people, obtained and assimilated the later form of alphabet during their trading voyages with the people of the west.”(b)

Others have suggested that Ogham was a writing system that could be traced back to Atlantis, but, understandably,  without offering any supporting evidence, the entire subject is fertile ground for speculation. There are around 400 examples of Ogham writing worldwide of which 360 are in Ireland(d)!

Anthony Woods in his highly speculative Atlantis Ireland [1775] claims that Ogham is the world’s oldest alphabet. It was certainly one of the most inefficient, only suitable for short inscriptions. Woods offers the Shigar Idol found over 5,000 km away in Russia as evidence. This artefact, which is thought to be 11,500 years old, has ogham-like marks on it. If Woods is right, we are expected to believe that Ogham lasted for 10,000 years without badly needed improvement, until it emerged in Ireland around 500 AD. This is speculation gone mad.

The Disney film, Atlantis:The Lost Empire, included a language and script created by Marc Okrand who also invented ‘Klingon’ for the Star Trek TV shows and films. Some New Age writers, who are even less convincing than Disney, have also tried to connect the Runic script of Northern Europe with Atlantis.

Lucile Taylor Hansen devotes chapter 59 of The Ancient Atlantic[572] to a general review of similarities between aspects of the ‘alphabets’ of the Maya, Phoenicians and Greeks among others.

Writing in Atlantis. The text of Plato makes it quite clear that writing was a feature of Atlantean culture. This is just another element in the overall picture presented by Plato of Atlantis as a Bronze Age civilisation, although there is always the possibility that the inclusion of writing might be a Platonic addition, designed to enhance the underlying core tale of a very ancient civilisation destroyed by flooding. If this flooding coincided with the melting of the glaciers at the end of the last Ice Age then it could be dated to around 9500 BC, a date that is in agreement with Solon’s apparent date for the demise of Atlantis.

R. Cedric Leonard(a) has developed the idea that an even older writing system in Western Europe, such as that found on the Glozel Tablets may have had a link with Atlantis. These tablets have been dated to as early as 10,000 BC, but I have some reservations regarding the reliability of this date. Similarly, the writing of the Vinca culture of Eastern Europe is believed to date from around 5500 BC.

However, an article in New Scientist (20.02.10) reports that a study of cave markings at 146 sites in France revealed that a total of just 26 signs were used with varying frequency between 33,000 BC and 8000 BC. The symbols were only found in Southern France as most of the north was glaciated for much of this period. If these findings are substantiated it will raise questions regarding the date of the arrival of modern man into Europe.

Genevieve von Petzinger a Canadian paleoanthropologist and rock art researcher has studied geometric signs found in caves and other sites dating back 40,000 years. In a 2019 paper, her work is discussed including that she has identified “32 recurring symbols in all cultures of 40,000 years ago.” That was the easy part, now they must be interpreted(g).

There is no evidence of any developed writing system until around 3500 BC in Harappa in the Indus Valley, while a few hundred years later the Sumerians were using a sophisticated cuneiform script and the Egyptians had developed a system of hieroglyphics(d).

Crete had crude writing around 3000 BC, but it would be another 1000 years before the earliest alphabetic inscription discovered so far would be inscribed on a rock, in what is now Southern Egypt. This has been dated to the 1900’s BC, two hundred years earlier than expected. This particular epigraph has prompted speculation that what we know as an alphabet originated in Egypt, but it is not unreasonable to think that this revision will not be the last. However, the March/April 2010 edition of the respected Biblical Archaeology Review has an article that identifies the early alphabet as a development of hieroglyphics(c).

This evolution from hieroglyphs to modern European scripts is now available as a chart by Matt Baker. 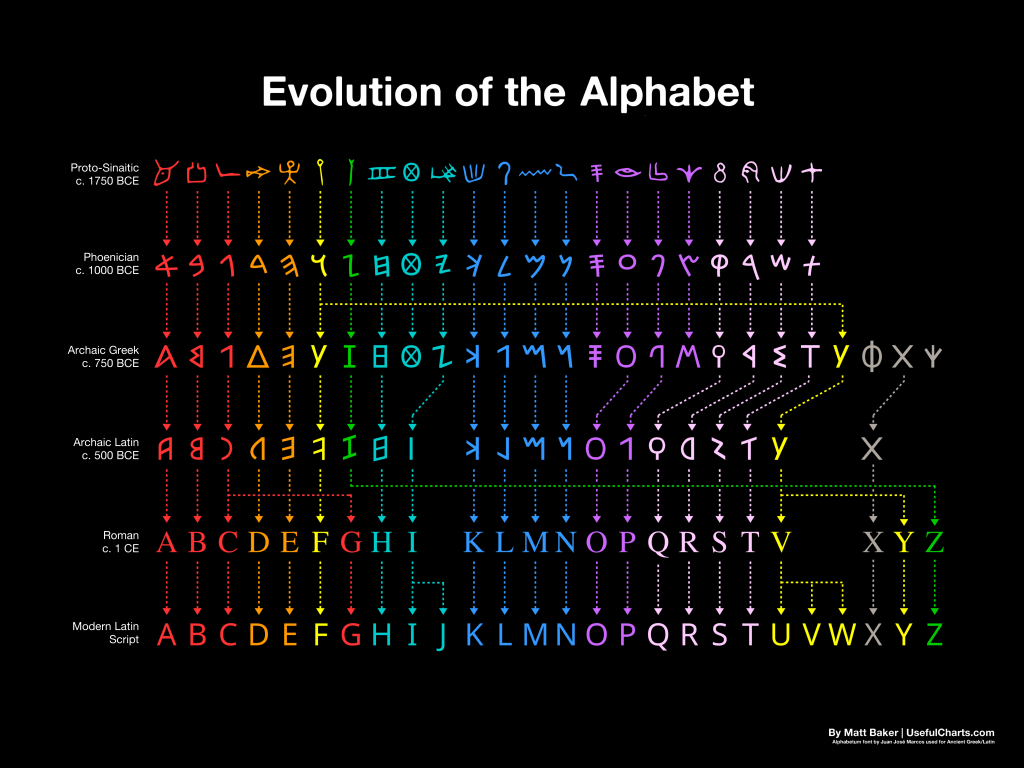 Although the Phoenicians have often been credited with the invention of the precursor to modern Western scripts around 1,100 BC, it now appears more likely that they were responsible for the adaptation of an even earlier character system. The earliest known Hebrew writing has now been dated to the 10th century BC(b).

>Peter Daughtrey in his book, Atlantis and the Silver City [893] has devoted chapter seventeen to offering the claim that the earliest alphabet developed in southwest Iberia and by extension in Atlantis. An abbreviated version can be read on his website(h).<

In Meso-America, the Olmecs appear to have been the first to develop a writing system around 900 BC, 600 years earlier than the Maya.  However, the late emergence of a script there would appear to argue against a common Atlantean source for cultures on both sides of the Atlantic.

In 1905, Flinders Petrie and his wife, also an archaeologist, discovered strange signs on the side of a mine in the Sinai Peninsula, which they identified as alphabetical. After a decade of study, Sir Allan Gardiner published a decipherment of the symbols in 1916(f). They became known as proto-Sinaitic script and dated to between 1850 and 1550 BC. However, there were individual ‘letters’ whose identities were disputed. In 2017, Douglas Petrovich claimed to have solved all outstanding issues [1767].  Today, Orly Goldwasser, an Israeli egyptologist, is arguably the leading promoter of the idea that this was the earliest example of an alphabet discovered so far(e).

The insistence by some on the great antiquity of ancient scripts is driven by those Atlantis researchers who blindly accept the 9,600 BC date for the destruction of a literate Atlantis given by Plato. If an early date for writing cannot be more fully substantiated then Plato’s date must be reappraised.

(g) There are 32 recurring symbols in all cultures of 40,000 years ago – The Tapestry of Time (larazzodeltempo.it) *