Sceptics regarding the existence of Atlantis have been around since the time of Plato. The first such critic was assumed to be Aristotle, a pupil of Plato’s, who apparently denounced the Atlantis tale as an invention. However, this presumed scepticism of Aristotle’s has now been seriously challenged by Thorwald C. Franke in a 2012 book, Aristotle and Atlantis[706] specifically dealing with the subject. Nevertheless, Aristotle does record the existence a large island in the Atlantic known to the Phoenicians as Antilia, inadvertently supporting Plato’s story(i).

Franke has recently outlined the extensive support for the existence of Atlantis from the earliest times in his recent German language book[1255]. He has followed that with a YouTube video(j) in which he relates how scepticism became more extensive in the 19th century.

Many modern commentators believe that in the interests of dramatic effect Plato heavily embellished the core truth underlying the story, namely that of an ancient submerged civilisation.

However, when we consider modern sceptics we find that they have been provided with unlimited ammunition by the poor scholarship of many Atlantis supporters and the outright ravings of the likes of Blavatsky, Steiner, Cayce, and a profusion of other authors, who claim to have channelled information regarding Atlantis.

Edwin Ramage, in his essay[522] on Atlantis, makes the interesting comment that “believers tend to overshadow the sceptics for the simple reason that a positive theory, whether it is simple or elaborate, tends to be more attractive and to make better reading than any attempt at refutation, no matter how well taken it may be.” This is probably akin to referenda questions being framed by governments in a manner that favours a Yes vote that will provide the outcome that they want. This is because most people prefer to say Yes rather than No.

However, if the Atlantis narrative has any truth in it, the legitimate criticisms of sceptics must be given due consideration. One such sceptic is Paul Jordan who has produced a highly critical work[418] on the subject. Jason Colavito is another vocal non-believer and has written a considerable amount on the subject(d). A number of other websites(b)(c)(e) can also be recommended.

I recently came across a sceptic review of Atlantis theories by Justin Spring which I thought contained some novel views and although I totally disagree with his conclusions, I feel it should be given a reading(g).

While I expect that few sceptics will be reading this entry, I would recommend to anyone a paper by Karla Mclaren, a former New Age ‘believer’ who developed into a sceptic(f).

A 2015 survey by Chapman University of California was repeated in 2016, which suggested that nearly 40% of American believe that an advanced prehistoric civilisation, such as Atlantis, existed, causing consternation among sceptics(h). Why they found it so depressing is hard to understand, since popular belief is no guarantee that it is supported by reality. After all, it was once commonly thought that the sun revolved around the earth!

There are times when I regret that I have not had a university education and then along comes a qualified academic who manages to remove any such feeling. One of those is Seth Stein, a professor at Northwestern University, who specialises in plate tectonics, who was reported in early 2018(k) to have proposed that “one of the strongest reasons to dispel Atlantis as a true ancient civilization is the fact that we haven’t found it.” This asinine comment shows a total abandonment of critical thinking, because he seems to think that because something has not been found, proves that it does not exist. For example, before Heinrich Schliemann, Troy did exist, but had yet to be located. Professor Stein’s stupid statement is also built on a flawed understanding of what Plato said or more correctly, did not say. Plato never described Atlantis as a continent, as assumed by Stein and it can be reasonably argued that our Atlantic Ocean where he sought Atlantis was not the Atlantic ‘Sea’ referred to by Plato. I suggest that Stein sticks to earth sciences and leave Atlantis to others.

Abydos, known locally as Umm el-Qa’ab, is a site in Upper Egypt that contains a variety of structures including the Osirion, which is alleged to be burial-place of Osiris, the Egyptian deity who was the father of Horus and the brother and husband of Isis. It was discovered in 1901/2 by Sir William Flinders Petrie (1853-1942) and Margaret Alice Murray (1863-1963)(c). The Osirion (Osireion) has a number of unusual features that have led some, such as John Anthony West(a) to conclude that it is from a much earlier period than the adjacent Temple of Seti I.

This view is based on at least three observations. 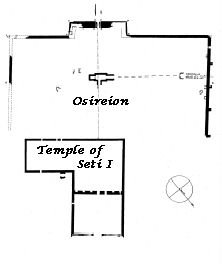 (i) The foundations of the Osirion are much lower than those of the Temple of Seti, a feature that would have been totally unprecedented. It is more likely that structure was originally designed to be built at ground level in a conventional manner. However, after construction, the ground level rose over succeeding years with the deposits of silt from the annual inundation by the Nile. Consequently, when the adjacent Temple of Seti was built, a considerable number of years later, it was erected on much higher ground beside a buried Osirion.

(ii) The Temple of Seti has an unusual unique outline being ‘L’ shaped instead of having the usual rectangular form. This would seem to suggest that during the construction of the temple, the builders discovered the buried Osirion and had to alter the original design.

(iii) For some, the most compelling reason for dating the Osirion differently to Seti’s Temple is that stylistically the structure is totally at variance with anything else from Seti’s era.

In 1995, Graham Hancock drew attention[275] to this difference in style and in a 2019 article, Freddy Silva also commented on this incongruity(h)(k), but notes that while the Osirion at first sight does not appear to have any obvious astronomical alignment, “only in the epoch of 10,000 BC do connections begin emerge, for the constellation Cygnus appears in full upright ascent over the horizon in conjunction with the axis of the temple, the entrance framing its brightest star, Deneb.”

Silva added that the Osirion “represents a complete departure from standard temple design. However, a geological appraisal contradicts this opinion. In ancient times the level of the Nile was fifty feet lower than today, its course seven miles closer to and beside the Osirion. When North Africa was subjected to major flooding between 10,500-8000 BC, layers of Nile silt gradually compacted and rose inch by inch until they surrounded and covered the Osirion. In other words, the temple was originally a freestanding feature on the floodplain.”

On cue(i), Jason Colavito attacked Silva, pointing out a bad mistake where Silva incorrectly quoted Diodorus Siculus, subtly implying that everything else that he wrote was also erroneous.

For my part, the apparent absence of contemporary hieroglyphics in the Osirion seems to suggest a preliterate period for its construction. The Valley Temple and the Sphinx Temple at Giza show similiar construction techniques and are also devoid of inscriptions. As I see it, there is no unequivocal evidence on offer to demonstrate that the Osirion could not be much earlier than the nearby Seti Temple. Therefore, I would urge caution before hastily dismissing Hancock, Silva and others regarding this matter.

>The conventional view that Seti I was responsible for the building of both the Temple and the Osireion is expressed in a well-illustrated paper by Keith Hamilton on the Academia.edu website(j).<

This suggestion of an earlier date, such as in Ralph Ellis’ Thoth, the Architect of the Universe[0517], has added weight to the more general claim that other Egyptian monuments such as the Sphinx and some of the lower courses of the Great Pyramid are also from a predynastic era. This is interpreted by some as evidence of an early civilisation that might be more in keeping with 9600 BC date in the story of Atlantis told to Solon by the Egyptian priests at Sais.

A sceptic’s view of the claimed early date for the Osirion can be read online(d). 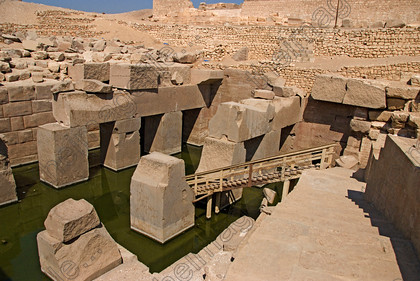 3000BC and again possibly even pre-dynastic.

Klaus H. Aschenbrenner has produced an Internet article, Giza and Abydos: The Keys to Atlantis, unfortunately in German only, which bravely promotes the idea of an 11th millennium BC date for parts of both Giza and Abydos.

Hieroglyphics in the Temple of Seti at Abydos have also been seized upon by proponents of ancient technology existing in prehistoric times and possible links to a hi-tech Atlantis. These carvings suggest the outline of a helicopter and a submarine! A refutation of this interpretation, by Margaret Morris(b) and others(e)(f) has demonstrated that the carvings have been reworked and that some of the plaster infill had deteriorated. Furthermore, there is clear evidence that images of the hieroglyphics circulating on the internet were digitally ‘tidied up’.

>Wayne James Howson offers some radical ideas concerning the Osireion in a 400-page book available on the Academia.edu website(l). Howson was influenced by the work of Jim Westerman(m).<

In November 2016, it was announced that a city was unearthed not far from the Abydos temples, where “it is believed the city was home to important officials and tomb builders and would have flourished during early-era ancient Egyptian times.(g)“