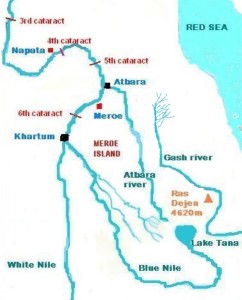 Island, Peninsula or Continent?  Advocates of a continental rather than island identification for Atlantis have to contend with the fact that Plato never referred to Atlantis as a continent instead he used the Greek words for island, namely ‘nesos’ and ‘neson’. Their line of argument is that these words in addition to ‘island’ or ‘islands’ can also mean “islands of an archipelago” or “peninsula”. Furthermore it is claimed that the ancient Greeks had no precise word for ‘peninsula’.

Gilles le Noan[912], quoted by Papamarinopoulos[629.558], has offered evidence that there was no differentiation in Greek between ‘island’ and ‘peninsula’ until the time of Herodotus in the 5th century BC. In conversation with Mark Adams[1070.198] he explains that in the sixth century BC, when Solon lived, nesos had five geographic meanings. “One, an island as we know it. Two, a promontory. Three, a peninsula. Four, a coast. Five, a land within a continent, surrounded by lakes, rivers or springs.”

Robert Bittlestone, in his Odysseus Unbound [1402.143] also notes that “nesos usually means an island whereas cheronesos means a peninsula, but Homer could not have used cheronesos when referring to the peninsula of Argostoli for two very good reasons. First, it cannot be fitted into the metre of the epic verse and second, the word hadn’t yet been invented: it doesn’t occur in Greek literature until the 5th century BC.”

Another researcher, Roger Coghill, echoed the views of many when he wrote on an old webpage that “To the Greeks peninsulae were the same as islands, so the Peloponnesian peninsula was “the island of Pelops” and the Chersonnese was to them “the island of Cherson”. Similarly in describing a place found after escaping the Pillars of Hercules, Plato quite normally describes the Lusitanian coast (modern Portugal) as an “island”, reached, he clearly says, after passing Cadiz”.

Johann Saltzman claimed that ‘nesos’ did not mean ‘island’ or ‘peninsula’ but ‘land close to water’. However I would be happier sticking to the respected Liddell & Scott’s interpretation of island or peninsula. If Saltzman is correct, what word did the Greeks use for island?

The Modern Greek word for peninsula is ‘chersonesos’ which is derived from ‘khersos’ (dry) and ‘nesos’ (island) and can be seen as a reasonable description of a peninsula. It is worth noting that the etymology of the English word ‘peninsula’ is from the Latin ’paene’ (almost) and ’insula’ (an island).

Jonas Bergman maintains that the Greek concept of ‘island’ is one of detachment or isolation. He also points out that the original Egyptian word for island can also mean lowland or coastland, because the Egyptians had a different conception of ’island’ to either the ancient Greeks or us. Some commentators have claimed that the Egyptians of Solon’s time described any foreign land as an island.

Eberhard Zangger offers another correction of the Atlantis mystery: If one compares the land- / sea-distribution in Egypt and in the Aegean Sea, it becomes obvious why the Egyptians used at that time the expression “from the islands”. While today the word “island” has a clear meaning, this was not the case at the late Bronze Age. For the Egyptians more or less all strangers came from the islands. As there had been practically no islands in Egypt, the ancient Egyptian language did not have any special character for it. The hieroglyphic used for “island” was also meaning “sandy beach” or “coast” and was generally used for “foreign countries” or “regions on the other side of the Nile”.

A contributor to the Skeptic’s Dictionary(b) has added “I remind you that the Greek definition of “island” paralleled that of “continent.” To the Greeks, Europe was a continent. West Africa was an island, especially since it was cut off from the rest of what we now call “Africa” by a river that ran south from the Atlas mountains and then west to what is now the Western Sahara. This now dry river was explored by Byron Khun de Prorok in the 1920’s.”

Reginald Fessenden wrote: “One Greek term must be mentioned because it has given rise to much confusion. The word ‘Nesos’ is still translated as meaning ‘island’ but it does not mean this at all, except perhaps in late Greek. The Peloponnesus is a peninsula. Arabia was called a “nesos” and so was Mesopotamia”. This ambiguity in the written Greek and Egyptian of that period was highlighted at the 2005 Atlantis Conference by Stavros Papamarinopoulos.

Werner Wickboldt pointed out at the same conference that Adolph Schulten in the 1920’s referred to a number of classical writers who used the term ‘nesos’ in connection with the Nile, Tiber, Indus and Tartessos, all of which possessed deltas with extensive networks of islands.

To confuse matters even further, there have been a number of theories based on the idea that the ‘island’ of Atlantis was in fact land surrounded by rivers rather than the sea. These include Mesopotamia in Argentina proposed by Doug Fisher, the Island of Meroë in Sudan suggested by Thérêse Ghembaza and a large piece of land bound by the Mississippi, Ohio, Potomac rivers offered by Henriette Mertz. However, none of these locations match Plato’s description of Atlantis as a maritime trading nation with a naval fleet of 1200 ships, nor do any of them explain how they controlled the Mediterranean as far as Egypt and Tyrrhenia.

The waters around Plato’s island are indeed muddy!