Tartessos or Tartessus is generally accepted to have existed along the valley of the Guadalquivir River where the rich deposits of copper and silver led to the development of a powerful native civilisation, which traded with the Phoenicians, who had colonies along the south coast of Spain(k).

A continuing debate is whether Tartessos was developed by a pre-Phoenician indigenous society or was a joint venture by locals along with the Phoenicians?(o) One of the few modern English-language books about Tartessos was written by Sebastian Celestino & Carolina López-Ruiz and entitled Tartessos and the Phoenicians in Iberia [1900].

It is assumed by most commentators that Tartessos was identical to the wealthy city of Tarshish that is mentioned in the Bible. There have been persistent attempts over the past century to link Tartessos with Atlantis. The last king of Tartessia, in what is now Southern Spain, is noted by Herodotus to have been Arganthonios, who is claimed to have ruled from 630 BC until 550 BC. Similarly, Ephorus a 4th century BC historian describes Tartessos as ‘a very prosperous market.’ However, if these dates are only approximately true, then Atlantis cannot be identified with Tartessos as they nearly coincide with the lifetime of Solon, who received the story of Atlantis as being very ancient.

However, the suggested linkage of Tartessos with Atlantis is disputed by some Spanish researchers, such as Mario Mas Fenollar [1802] and Ester Rodríguez González(n). Mas Fennolar has claimed that at least a thousand years separated the two.>Arysio dos Santos frequently claimed that Atlantis was Tartessos throughout his Atlantis and the Pillars of Hercules [1378].< 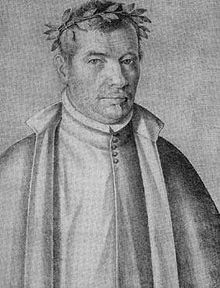 The existence of a ‘Tartessian’ empire is receiving gradual acceptance. Strabo writes of their system of canals running from the Guadalquivir River and a culture that had written records dating back 6,000 years. Their alphabet was slightly different to the ‘Iberian’. The Carthaginians were said to have been captured by Tartessos after the reign of Arganthonios and after that, contact with Tartessos seems to have ended abruptly!

The exact location of this city is not known apart from being near the mouth of the Guadalquivir River in Andalusia.  The Guadalquivir was known as Baetis by the Romans and Tartessos to the Greeks. The present-day Gulf of Cadiz was known as Tartessius Sinus (Gulf of Tartessus) in Roman times. Cadiz is accepted to be a corruption of Gades that in turn is believed to have been named after Gaderius. This idea was proposed as early as 1634 by Rodrigo Caro, the Spanish historian and poet, in his Antigüedades y principado de la Ilustrísima ciudad de Sevilla, now available as a free ebook(i). 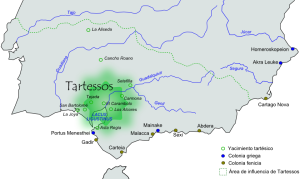 In 1849, the German researcher Gustav Moritz Redslob (1804-1882) carried out a study of everything available relating to Tartessos and concluded that the lost city had been the town of Tortosa on the River Ebro situated near Tarragona in Catalonia. The idea received little support.

A few years ago, Richard Cassaro endeavoured to link the megalithic walls of old Tarragona with the mythical one-eyed Cyclops and for good measure suggest a link with Atlantis(l). Concerning the giants, the images of doorways posted by Cassaro are too low to comfortably accommodate giants! Cassaro has previously made the same claim about megalithic structures in Italy(m)

The German archaeologist Adolf Schulten spent many years searching unsuccessfully for Tartessos, in the region of the Guadalquivir. He believed that Tartessos had been founded by Lydians in 1150 BC, which became the centre of an ancient culture that was Atlantis or at least one of its colonies. Schulten also noted that Tartessos disappeared from historical records around 500 BC, which is after Solon’s visit to Egypt and so could not have been Atlantis.

Otto Jessen, a German geographer, also believed that there had been a connection between Atlantis and Tartessos. Jean Gattefosse was convinced that the Pillars of Heracles were at Tartessos, which he identifies as modern Seville. However, Mrs E. M. Whishaw, who studied in the area for 25 years at the beginning of the 20th century, believed that Tartessos was just a colony of Atlantis. The discovery of a ‘sun temple’ 8 meters under the streets of Seville led Mrs Whishaw to surmise[053] that Tartessos may be buried under that city. Edwin Björkman wrote a short book, The Search for Atlantis[181] in which he identified Atlantis with Tartessos and also Homer’s Scheria.

Steven A. Arts, the author of Mystery Airships in the Sky, also penned an article for Atlantis Rising in which he suggests that the Tarshish of the Old Testament is a reference to Tartessos and by extension to Atlantis(r)!

More recently Karl Jürgen Hepke has written at length, on his website(a), about Tartessos. Dr Rainer W. Kühne,  following the work of another German, Werner Wickboldt, had an article[429] published in Antiquity that highlighted satellite images of the Guadalquivir valley that he has identified as a possible location for Atlantis. Kühne published an article(b) outlining his reasons for identifying Tartessos as the model for Plato’s Atlantis.

Although there is a consensus that Tartessos was located in Iberia, there have been some refinements of the idea. One of these is the opinion of Peter Daughtrey, expressed in his book, Atlantis and the Silver City[0893] in which he proposes that Tartessos was a state which extended from Gibraltar around the coast to include what is today Cadiz and on into Portugal’s Algarve having Silves as its ancient capital.

It was reported(c) in January 2010 that researchers were investigating the site in the Doñana National Park, at the mouth of the Guadalquivir, identified by Dr Rainer Kühne as Atlantis in a 2011 paper(s). In the same year, Professor Richard Freund of the University of Hartford garnered a lot of publicity when he visited the site and expressed the view that it was the location of Tartessos which he equates with Atlantis.>The Jerusalem Post in seeking to give more balance to the discussion quoted archaeology professor Aren Maeir who commented that  “Richard Freund is known as someone who makes ‘sensational’ finds. I would say that I am exceptionally skeptical about the thing, but I wouldn’t discount it 100% until I see the details, which haven’t been published as far as I know.”(u)<

A minority view is that Tarshish is related to Tarxien (Tarshin) in Malta, which, however, is located some miles inland with no connection to the sea. Another unusual theory is offered by Luana Monte, who has opted for Thera as Tartessos. She bases this view on a rather convoluted etymology(e) which morphed its original name of Therasia into Therasios, which in Semitic languages having no vowels would read as ‘t.r.s.s’ and can be equated with Tarshish in the Bible, which in turn is generally accepted to refer to Tartessos. Giorgio Valdés favours a Sardinian location for Tartessos(f). Andis Kaulins has claimed that further south, in the same region, Carthage was possibly built on the remains of Tartessos, near the Pillars of Heracles(j).

A more radical idea was put forward in 2012 by the Spanish researcher, José Angel Hernández, who proposed(g)(h) that the Tarshish of the Bible was to be found in the coastal region of the Indus Valley, but that Tartessos was a colony of the Indus city of Lhotal and had been situated on both sides of the Strait of Gibraltar!

A recent novel by C.E. Albertson[130] uses the idea of an Atlantean Tartessos as a backdrop to the plot.

A relatively recent claim associating Tartessos with Atlantis came from Simcha Jacobovici in a promotional interview(p) for the 2017 National Geographic documentary, Atlantis Rising. In it, Jacobovici was joined by James Cameron as producer, but unfortunately, the documentary did not produce anything of any real substance despite a lot of pre-broadcast hype.

There is an extensive website(d) dealing with all aspects of Tartessos, including the full text of Schulten’s book on the city. Although this site is in Spanish, it is worthwhile using your Google translator to read an English version.

“Today, researchers consider Tartessos to be the Western Mediterranean’s first historical civilization. Now, at an excavation in Extremadura—a region of Spain that borders Portugal, just north of Seville—a new understanding of how that civilization may have ended is emerging from the orange and yellow soil. But the site, Casas del Turuñuelo, is also uncovering new questions.”(q) First surveyed in 2014 it was late 2021, a report emerged of exciting excavations there that may have a bearing on the demise of Tartessos. Work is currently on hold because of a dispute with landowners, with only a quarter of the site uncovered. The project director is Sebastian Celestino Perez.>The Atlas Obscura website offers further background and details of discoveries at the site(t).<

(p) Lost City of Atlantis And Its Incredible Connection to Jewish Temple (israel365news.com)