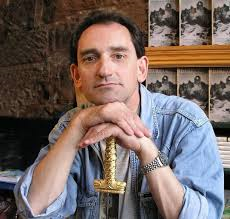 Graham Phillips is a British investigator with a number of books [034][035][036] on ‘alternative history’ to his credit. One of them [034] originally entitled Act of God was republished in the USA with the title of Atlantis and the Ten Plagues of Egypt. This 358-page volume contains just TWO pages on Atlantis where the author suggests that the 2nd millennium BC eruption of Thera was the cause of the destruction of Atlantis. This unscrupulous retitling is a sad reflection on the standards of the American publishers.

His most recent book [036] offers evidence of a close encounter between the earth and a comet in 1485 BC that produced an apparition that may have appeared twenty times the size of a full moon. Phillips claims that it had a profound effect on those that witnessed it and led to widespread forms of monotheism, including that of Moses and Akhenaten. What is even more radical is his claim that the comet’s tail contained an amino acid such as vasopressin that can make humans more aggressive and which led to a simultaneous outbreak of wars in many parts of the world between nations that had previously lived in harmony with each other. This particular aggressive phase appears to have subsided after a period of about ten years.