Carl Festin (1957- ) is a Swedish researcher who was prompted by questions from his children to investigate the history of civilisation. His studies led him to conclude that the hundreds of worldwide flood myths involved a catastrophe that involved the biblical story of Noah* and Plato’s 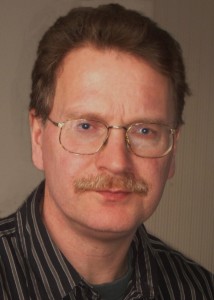 In a PowerPoint presentation provocatively entitled Noah, Refugee from Atlantis Festin outlines a new Atlantis theory. He first suggests that a ridge of sediment built up in the vicinity of Gibraltar gradually cutting off the Mediterranean from the Atlantic when sea levels were much lower during the last Ice Age. This similar in some ways with the theory of Paulino Zamarro. 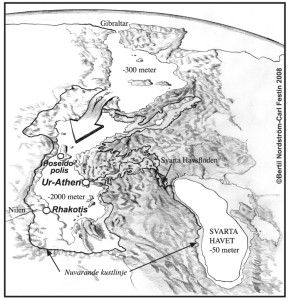 Sweden was claimed to be the location of Atlantis by Olaus (Olaf) Rudbeck in the 17th century. Before him another Swede, Johannes Bureus, expressed similar views. His friend Carl Lundius supported Rudbeck’s theories, but received none of the acclaim.

In the 18th century Carl Friedrich Baër was happy to follow a fashion, which placed Atlantis in the Holy Land. I am not aware of any major Swedish contribution to Atlantology in the 19th century.*However, the following century saw a number of Swedish researchers make valuable contributions to the subject.*

The discovery of the Mid Atlantic Ridge led René Malaise and Hans Pettersson to suggest the Azores as remnants of Atlantis, an idea still popular today. Around the same time Gunnar Rudberg proposed that Syracuse in Sicily had inspired some of Plato’s description of Atlantis. Arvid Högbom advocated the North Sea as the location of Atlantis in 1915, long before Jürgen Spanuth. In the same region Nils Bergquist opted for the Dogger Bank as has Ulf Erlingsson.

More recently, we seem to have come full circle as Bertil Falk has revived some of Rudbeck’s ideas(a) and a short illustrated 2007 paper (updated 2015)(b) by Robert Fritzius also added some additional modern support. However, for something quite different we have Carl Festin promoting a Mediterranean location.

*Nils-Axel Mörner and Bob Lind, two controversial researchers, have proposed, in a number of papers, that a Bronze Age trading centre existed in southeast Sweden, which had links with the Mycenaeans, Minoans and Phoenicians in the Mediterranean. They suggest that ancient references to Hyperborea may have been generated by this trade. However, although they do not associate Hyperborea with the story of Atlantis, they delivered their theories in papers presented to the Atlantis Conferences of 2008 [750.685] and 2011(c). They also touch on a number of other peripheral subjects including Cygnus, archaeoastronomy and amber. Similar views on early Baltic trade with the Mediterranean have been expressed elsewhere(d).*