Homer (c. 8th cent. BC) is generally accepted as the author of the Iliad and the Odyssey, regarded as the two greatest epic poems of ancient Greece. A recent study of the Greek used by Homer has enabled scientists from the University of Reading to confirm that the language used is compatible with that used in the 8th century BC, in fact dating it to around 762 BC(i).

It should also be noted that over 130 quotations from the Illiad and Odyssey have been identified in Plato’s writings(s). George Edwin Howes (1865-1942), an American classicist, produced a dissertation[1458] on Homeric quotations in Plato and Aristotle.

Almost nothing is known of his life. He has been variously described as mad, blind and even mythical. Andrew Dalby, the English linguist, has gone so far as to claim[0591] that the author of the two famed epics was in fact a woman! While in 1897 Samuel Butler, the novelist, was even more specific when he proposed that Homer was a Sicilian woman(j).

For centuries it was assumed that the content of these Homeric poems was the product of his imagination, just as the historical reality of Homer himself has been questioned. In 1795, F.A. Wolf, a German academic declared that ‘Homer’ was in fact a collective name applied to various 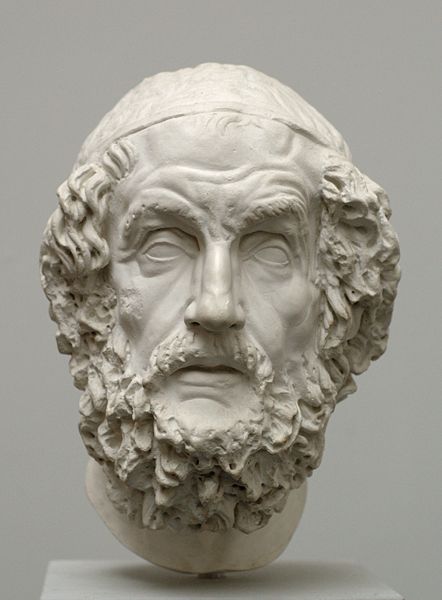 poets whose works were finally combined into their present form in the 6th century BC. Wolf’s ideas sparked furious argument among Greek scholars that still resonates today. Now (2015), historian, Adam Nicholson has claimed that the author ‘Homer’ should not be thought of as a person but instead as a ‘culture’(o).

The identification of the site at Hissarlik in modern Turkey as Troy by Heinrich Schliemann led to a complete re-appraisal of Homer’s work and, of course, further controversy. Homer’s Iliad is the story of the Trojan War and it has been suggested that in fact he had compressed three or more Trojan wars into one narrative. What is not generally known is that there are also ancient non-Homeric accounts of the Trojan War(q).

Kenneth Wood and his wife Florence have built on the research of his mother-in-law, the late Edna Leigh, and produced, Homer’s Secret Iliad[391], a book that attempts to prove that the Iliad was written as an aide memoire for a wide range of astronomical data.

Allied to, but not directly comparable with, is the astronomical information identified in the Bible by the likes of E. W. Maunder (1851-1928)[1137].

Guy Gervis has adopted some of their work and specifies a date of around 2300 BC for the events described in the Iliad and Odyssey, based on an analysis of this astronomical data(n). Harald A.T. Reiche held  similar views which followed some of the ideas expressed in Hamlet’s Mill[0524]  by Santillana & Dechend who were colleagues of Reiche at M.I.T. They also claimed that “myths were vehicles for memorising and transmitting certain kinds of astronomical and cosmological information.”

Much has been written about the historicity of Homer’s epic accounts, including a good overview on Wikipedia(ab). Many have concluded that Homer did use real events, even if they were frequently dressed in mythological clothing compatible with the literary conventions of his day. I consider Plato to have treated the story of Atlantis in a similar manner.

A recent study of solar eclipses recorded in Odyssey using data from NASA has apparently confirmed that Odysseus returned to Ithaca on 25th of October 1207 BC(r).

Scholars have generally supported the idea that Homer’s works have a Mediterranean backdrop with regular attempts to reconcile his geography with modern locations, such as the claim in 2005 by Robert Brittlestone, a British investigator to have located the site of Ithaca, the homeland of Odysseus, on the Greek island of Cephalonia. This popular idea should be put alongside the views of Zlatko Mandzuka who maintains[1396] that all the locations mentioned in the Odyssey can be identified in the Adriatic.

Nevertheless, there has been a growing body of opinion that insists that this Mediterranean identification is impossible. A range of alternative regions has been proposed(f) as the setting for the epics, which extend from Portugal as far northward as the Baltic.

In his Odyssey (VII: 80), Homer wrote about the island of Scheria in the western sea. His description of the island has been compared with Plato’s description of Atlantis and has led to the theory that they refer to the same place. There is little doubt that both the detailed geography and climatic descriptions given by Homer cannot be easily reconciled with that of the Mediterranean. Consequently, the Odyssey has had many interpretations, ranging from Tim Severin’s conclusion[392] that it refers entirely to the Eastern Mediterranean to Iman Wilkens’ book, Where Troy Once Stood[610], that has the voyage include the west coast of Africa, then across to the West Indies and following the Gulf Stream returns to Troy which he locates in Britain.

Location is not a problem exclusive to the writings of Plato. Wilkins claims are a reflection of similar ideas expressed by Théophile Cailleux[393] in the 19th century. Gilbert Pillot has also argued for voyages of Ulysses having taken him into the North Atlantic[742]. A Spanish review of Pillot’s book is available(ag). In 1973, Ernst Gideon (? – 1975) wrote in a similar vein in Homerus Zanger der Kelten, reprinted later as Troje Lag in Engelan[1643].

It is worth noting that Bernard Jones has recently moved [1638] Troy to Britain, probably in the vicinity of Cambridge, a location also preferred by Wilkens! Like many others he argues that Homer’s Iliad and Odyssey were not set in the Mediterranean as so many of the details that he provides are incompatible with the characteristics of that sea. However, Jones has gone further and claimed that there are details in Virgil’s Aeneid, which are equally inconsistent with the Mediterranean [p.6-10], requiring a new location!

An interesting overview of the various attempts to transfer the Odyssey from the Mediterranean to Northern Europe is available(w). Damien Mackey has also endorsed the idea of a Northern European backdrop to Homer’s Odyssey(aa).

Another researcher who places all of Odysseus’ travels in the eastern Atlantic is Gerard. W.J. Janssen of Leiden University on the academia.edu website(v).

The idea of an Atlantic backdrop to the Homeric epics will not go away. The Dutch researcher, N.R. De Graaf(ae). continues to write extensively on his Homeros Explorations website(ad)(x) regarding many of the specifics in Homer’s accounts. He has proposed Lanzarote in the Canaries as the location of Scheria, which concurs with the views of Wilkens and Janssen. Other specifics are that Ithaca was near Cadiz and that the Sparta was Cordoba, while the ancient city of Carmona on the plains of Andalucia are, for De Graaf, Mycenae!(af)

E.J. de Meester also argued(ac) for the British Isles as the location of many of Homer’s references. It struck me as quite remarkable that the level of debate regarding the date, source and geographical details of Homer’s works is rather similar to the controversy surrounding Plato’s Atlantis in Timaeus and Critias. The late Edo Nyland was another researcher who had also opted for a Scottish backdrop to the Odyssey and had recently published his views[394].

Felice Vinci also supports[019] a Northern European background to the Iliad and Odyssey. However, in Vinci’s case, Scandinavia, and in particular the Baltic Sea, is identified as the location for the adventures in Homer’s classic. An English language synopsis of his book is available on the Internet. The persuasiveness of Vinci’s argument has recently renewed interest in the idea of a Baltic Atlantis. The assumption being that if Troy could be located in the Baltic, so might Atlantis. Vinci’s views are comparable with those of J. Rendel Harris expressed in a lecture delivered in 1924(p)  in which he claims that “we are entitled to take Homer and his Odysseus out of the Mediterranean or the Black Sea, and to allow them excursions into Northern latitudes.”

However, a scathing review of Vinci’s book can be found on the Internet(d) and in issue 216 (2006) of Fortean Times written by Marinus Anthony van der Sluijs.

Further support for a Northern European Troy has come from the historian Edward Furlong, a former naval navigation officer, who has advocated for over twenty years that the journey of Odysseus went as far north as Norway. His particular views are outlined on the Internet(c) .

Other writers, such as the late Henrietta Mertz [0396/7], , have suggested that Homer’s epic refers to a trip to North America. Professor Enrico Mattievich Kucich of Lima University is also certain that the ancient Greeks discovered America America[400]. However revolutionary this idea may seem it shows how this particular subject is growing and would probably justify a reference book of its own.

The idea of an Atlantic backdrop to the Homeric epics will not go away. The Dutch researcher, N.R. De Graaf, continues to write extensively on his Homeros Explorations website(x) regarding many of the specifics in Homer’s accounts.

In 1973, James Bailey proposed in his well-received The God-Kings and the Titans[149] that the Odysseus recorded a trans-Atlantic trip. Evidence exists for large-scale mining in the Americas as early of the 5th millennium BC. Bailey maintained that the Europeans imported enormous quantities of copper and tin from Central and South America to feed the demands of the Old World Bronze Age, an idea that was later heavily promoted by Frank Joseph and in great, if overly speculative, detail by Reinoud de Jong(y).

Finally, the Atlantis connection with this entry is that if, as now appears to be at least a possibility, Homer’s Odyssey was about a journey to the North Sea then the possibility of a North Sea setting for the Atlantis story is somewhat reinforced.

A recent book[395] by Steven Sora has developed the Atlantic notion further with the suggestion that not only was Troy located outside the Strait of Gibraltar but that both Homer’s Trojan war and Plato’s Atlantean war are two versions of the same war with the understandable distortions and embellishments that can occur with a narrative, probably involving some degree of oral transmission and then written down hundreds of years after the events concerned.

Ukraine is soon to be added to the growing list of alternative locations for the setting of Homer’s epics with the publication of Homer, The Immanent Biography, a book by A.I. Zolotukhin(g). He claims that Homer was born in Alibant (Mykolayiv, Ukraine) on September 14, 657 BC(t). He follows the views of Karl Ernst von Baer (1792-1876) who believed that most of Odysseus’s travels took place in the Black Sea rather than the Mediterranean. Additionally, he locates Atlantis in the western Crimean area of Evpatoria(l). His 60-page book is available on his website(m).

An interesting paper(e) by the German historian, Armin Wolf, relates how his research over 40 years unearthed 80 theories on the geography of the Odyssey, of which around 30 were accompanied by maps. One of the earliest maps of the travels of Odysseus was produced by Abraham Ortelius in 1597(u) , in which the adventures of Odysseus all take place within the Central and Eastern Mediterranean, arguably reflecting the maritime limits of Greek experience at the time of Homer or his sources! Another website(z) by Jonathan S. Burgess, Professor of Classics at the University of Toronto offers further information on this, including some informative bibliographical material.

In 2009, Wolf published, Homers Reise: Auf den Spuren des Odysseus[669] a German language book that expands on the subject, also locating all the travels of Odysseus within Central and Eastern Mediterranean.

Wolf’s ideas were enthusiastically adopted by Wolfgang Geisthövel in his Homer’s Mediterranean[1578], who also concurs with the opinion of J.V. Luce [1579], who proposed that Homer was “describing fictional events against authentic backgrounds.” This would be comparable to a James Bond movie, which has an invented storyline set in actual exotic locations around the world.

Perhaps the most radical suggestion has come from the Italian writer, Michele Manher, who has proposed(h) that Homer’s Iliad originated in India where elements of it can be identified in the Mahabharata!

In August 2015, a fifteen hour reading of the Iliad was performed in London.