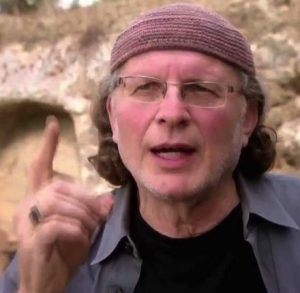 author. One of his more controversial books was The Jesus Family Tomb [1709], co-authored with Charles Pellegrino. Jacobovici subsequently directed a documentary, The Lost Tomb of Jesus, with James Cameron as executive producer.

>Following in the footsteps of Dan Brown, Jacobovici (with Barrie Wilson) published The Lost Gospel [1931] in which they recycle an old claim that Jesus married Mary Magdalene and had two children with her.<

The Jacobvici-Cameron collaboration goes back further to 2006 when they worked on The Exodus Decoded, a two-hour documentary in which, among other matters, it claims that the biblical Exodus took place a couple of hundred years before the generally accepted date(c).

Cameron also joined Jacobovici on the 2017 National Geographic documentary, Atlantis Rising. The documentary did not produce anything of substance despite a lot of pre-broadcast hype. During the programme, Jacobovici threw in the extraordinary claim that the Jewish menorah represents the concentric circles of the Atlantean capital cut in half(b), a daft idea, already suggested by Prof. Yahya Ababni(a).

National Geographic or Nat Geo are the registered trademarks of the National Geographic Society and are now, sadly, part of the Murdoch communications empire. Its magazine and TV channel enjoy global recognition. Undoubtedly, NG has enhanced our view of the world around us. One piece of NG trivia is that the word ‘tsunami’ first appeared in an English language publication in the September 1896 edition of National Geographic Magazine.

In May 1922 NG published its first picture of Stonehenge, now a century later it returned to this remarkable monument for its cover story in its August 2022 edition. It highlights how the use of new technologies has greatly enhanced our knowledge of the site and the people who built it. Jim Leary, a lecturer in field archaeology at the University of York admits that “a lot of the things we were taught as undergraduates in the 1990s we know now simply aren’t true.”  This beautifully illustrated article is a useful update on developments at this huge UNESCO World Heritage Site.

Generally, NG has avoided controversy, but not always(a), so it will be interesting to see how its new chief James Murdoch, a climate change denier(b), will deal with the NG views on the subject up ’til now(c). However, for me, it was something of a surprise when NG tackled the subject of Atlantis.

In a short 2011 article(l)., NG trotted out the now generally abandoned idea that Atlantis had been a continent. The idea was obviously later dumped by NG as well when James Cameron et al. went looking for Atlantis in Malta, Sardinia and Santorini in 2016.

However, I find that the NG treatment of Atlantis is inconsistent. In October 2011 an anonymous article(k) on one of their sites, entitled The Truth Behind Atlantis: Facts, declared that Atlantis was continental in size (and so must have been located in an Ocean?) This is based on a misinterpretation of the Greek word meison. Nevertheless last year NG had Simcha Jacobovici, remotely guided by James Cameron, scouring the Mediterranean, from Spain to Sardinia, Malta, and Crete for evidence of Atlantis. This attention-seeking exercise found nothing but a few stone anchors that proved nothing and inflicted on viewers an overdose of speculation!

NatGeo TV aired a documentary(g) in 2015 relating to earlier excavations in the Doñana Marshes of Southern Spain by a Spanish team and partly hijacked by Richard Freund. A new NG documentary, hyped with the involvement of James Cameron and Simcha Jacobovici, was filmed in 2016, and later broadcast at the end of January 2017. Initially, it was thought by Robert Ishoy to be in support of his Atlantis location of Sardinia, but at the same time, Diaz-Montexano was convinced that his Afro-Iberian theory was to be the focus of the film. To coincide with the airing of the new documentary D-M has published a new book, NG National Geographic and the scientific search for Atlantis[1394] with both English and Spanish editions.

Jason Colavito was promised a screener but had the offer subsequently withdrawn. One wonders why.

Once again NG promotes the region of the Doñana Marshes as a possible location for Atlantis(i), based on rather flimsy evidence, such as six ancient anchors found just outside the Strait of Gibraltar. They estimate the age of the anchors at 3,000-4,000 years old. unfortunately, they are not marked ‘made in Atlantis’. Rabbi Richard Freund, never afraid to blow his own shofar, makes another NG appearance. Jacobovici throws in the extraordinary claim that the Jewish menorah represents the concentric circles of the Atlantean capital cut in half, a daft idea, previously suggested by Prof. Yahya Ababni(k).

What I cannot understand is why this documentary spends time dismissing Santorini and Malta as possible locations for Plato’s Atlantis and at the same time ignoring the only unambiguous geographical clue that he left us, namely that the Atlantis alliance occupied part of North Africa and in Europe the Italian peninsula as far as Tyrrhenia (Tuscany) and presumably some of the islands between the two.

Overall, I think the NG documentaries have done little to advance the search for Atlantis as they seem to be driven by TV ratings ahead of the truth. Perhaps, more revealing is that Cameron is not fully convinced by the speculative conclusions of his own documentary.

For me, NG’s credibility as a TV documentary maker has diminished in recent years.  Just one reason is the “2010 National Geographic Channel programme, 2012: The Final Prophecy, enthused about an illustration in the Mayan document known as the Dresden Codex (because of where it is now kept), which was claimed to show evidence of a catastrophic flood bringing the world to an end in 2012. This illustration included a representation of a dragon-like figure in the sky spewing water from its mouth onto the Earth beneath, which has been taken by some, although by no means all, experts in Mesoamerican mythology to indicate the onset of a terminal world-flood. However, no date was given, so the link with 2012 is entirely spurious (Handwerk, 2009; Hoopes, 2011).”(n)

(a) National Geographic Shoots Itself in the Foot — Again! (archive.org) *