America as the home of Atlantis took off as an idea shortly after its discovery (or perhaps more correctly, rediscovery) by Columbus. Initially, reports sent back to Europe designated America as ‘Paradise’ 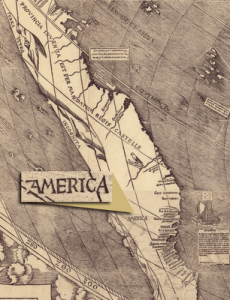 until its identification as Atlantis quickly took hold. John Dee in the time of Elizabeth I was convinced that the newly discovered Americas were in fact Atlantis, an idea endorsed by Francis Bacon. The first time that America was so named on a map was on the 1507(c) Waldseemüller map, sometimes referred to as “America’s birth certificate.” A rare copy of this map was recently found in Germany(e).

Nevertheless, from the early 1600’s dissenting voices were raised, such as those of José de Acosta, and Michel de Montaigne.

As late as 1700, a map of the world by Edward Wells was published in Oxford that highlights the paucity of information regarding the Americas at that time. However in this instance the accompanying text notes that “this continent with the adjoining islands is generally supposed to have been anciently unknown though there are not wanting some, who will have even the continent itself to be no other than the Insula Atlantis of the ancients.”

For over five centuries a variety of commentators have associated Atlantis with America and many of its ancient cultures together with a range of location theories that stretch from Maine through the Caribbean and Central America to Argentina.

Although most proponents of an American Atlantis, particularly following the continent’s discovery, did not specify a location, but were happy to consider the Americas in their entirety as Plato’s lost land. In 2019, Reinoud de Jonge published a paper declaring that from 2500-1200 BC America had been an Egyptian colony. He expanded on this in 2912(l) , when he claimed that the American colonies, North and South had supplied the copper and tin for the Bronze Age of the Mediterranean. For good measure he threw in a wildly speculative translation of the Phaistos Disk to support these contentions.

Over time attention was more focused on Mesoamerica and the northern region of South America, where the impressive remains of the Maya and Incas led many to consider them to be Atlantean.

North America received minimal attention until the 19th century, when an 1873 newspaper report(i) claimed that there was support from unnamed scientists for locating remnants of Atlantis in the Adirondacks and some of the mountains of Maine! More recently Dennis Brooks has advocated Tampa Bay, Florida, while John Saxer supports Tarpon Springs, also in Florida as Atlantean. To confuse matters further, Mary Sutherland locates Atlantis in the Appalachian Mountains of Kentucky and for good measure suggests that King Solomon’s mines are to be found in the same region!

For example, the discovery of the remains of the remarkable cultures of Mesoamerica generated speculation on the possibility of an Atlantean connection there. This view gained further support with the publication of Ignatius Donnelly’s groundbreaking  work on Atlantis.

Some have seen an Atlantic location for Atlantis as a conduit between the culture of ancient Egypt and that of Meso-America(d).

Half a century ago Nicolai Zhirov claimed that Plato had knowledge of America [458.22] indicated by his statement that Atlantis was in a sea with a continent encompassing it. He thought that this was the earliest record of a continent beyond the Atlantic.

However, Plato also said that Atlantis was surrounded ‘on all sides’ by this continent, which is not compatible with the Azores, advocated by Zhirov as the location of Plato’s sunken island. In an effort to strengthen this claim Zhirov also claims that there is evidence that King Sargon of Akkad travelled to America in the middle of the third millennium BC, an idea that has gained little traction.

The idea of Sumerians in America was promoted by A.H. Verrill and his wife Ruth, who claimed [838] that King Sargon travelled to Peru, where he was known as Viracocha. The Verrills support their contention with a range of cultural, linguistic and architectural similarities between the Sumerians and the Peruvians.

More recently, Andrew Collins has promoted the idea of Atlantis in the Caribbean, specifically Cuba. Followers of Edgar Cayce are still expecting the Bahamas to yield evidence of Plato’s island. Gene Matlock supports the idea of a Mexican location with an Indian connection, while Duane McCullough opts for Guatemala. Ivar Zapp and George Erikson have also chosen Central America for investigation. Further south Jim Allen has argued strongly for Atlantis having been located on the Altiplano of Bolivia. A website entitled American Atlantis Research from Edward Alexander , now offline, was rather weak on content and irritatingly referred to the ‘Andies’.

Although much of what has been written about an American location for Atlantis is the result of serious research, it all falls far short of convincing me that the Atlantis of which Plato wrote is to be found there. No evidence has been produced to even hint that any American culture had control of the Mediterranean as far Tyrrhenia in the north and Libya in the south. No remains or carvings of triremes or chariots have been found in the Americas. How could an ancient civilisation from America launch an attack across the Atlantic and at the furthest end of the Mediterranean 9,000 or even 900 years before Solon? An even more important question is, why would they bother? There is no evidence of either motive, means or opportunity for an attack from that direction.

A number of Plato’s descriptions of Atlantis would seem to rule out America as its location.

(a) As mentioned above, the ‘opposite continent’ referred to by Plato (Timaeus 25a) is described as encompassing the sea in which Atlantis lay. America cannot be described as enclosing the Atlantic.>Around 550 AD, Procopius noted that when viewed from the southern side of the Strait of Gibraltar “the whole continent opposite this was named Europe”(m) (not America)!<

(b) The Greeks only knew of three continents, Europe, Asia and Libya. Armin Wolf, the German historian, when writing about Scheria relates(f) that “Even today, when people from Sicily go to Calabria (southern Italy) they say they are going to the “continente.” I suggest that Plato used the term in a similar fashion and was quite possibly referring to that same part of Italy which later became known as ‘Magna Graecia’. Robert Fox in The Inner Sea[1168.141] confirms that this long-standing usage of ‘continent’ refers to Italy.

(c) Herodotus described Sardinia as “the biggest island in the world” (Hist.6.2). In fact Sicily is marginally larger but as islands were measured in those days (Felice Vinci) [019] by the length of their coastal perimeter Herodotus was correct. Consequently, it can be argued that since Cuba and Hispaniola are much more extensive than Sardinia, the Greeks had no knowledge of the Caribbean.

(d) Plato makes frequent reference to horses in Atlantis. The city itself had a track for horseracing (Critias 117c). The Atlanteans had thousands of chariots (Critias 119a). The Atlanteans even had horse baths (Critias 117b). All these references make no sense if Plato was describing an American Atlantis as there were no horses there for over 12,000 years, when they died out, until brought back by the Spaniards millennia later. Furthermore, it makes even less sense if you subscribe to the early date (9600 BC) for Atlantis as it is thousands of years before we have any evidence for the domestication of the horse, anywhere.

A recent study of worldwide DNA patterns suggests that “no more than 70 people inhabited North America 14,000 years ago.”(b) But a more important claim has been offered by Professors Jennifer Raff and Deborah Bolnick who have co-authored a paper offering evidence(J) that the genetic data only supports a migration from Siberia to America. This certainly runs counter to any suggestion of transatlantic migration from Europe.

A 2013 book, L’America dimenticata [1060], by Italian physicist and philologist Lucio Russo, claims that the ancient Greeks had knowledge of America and it was gradually forgotten because of mistakes made by Ptolemy including a 15 degree error for the latitude of the Canaries(g).

While there is extensive debate regarding the Americas being visited by ancient Greeks (Minoans), Phoenicians and even Sumerians, there seems little doubt that America had been visited by various other peoples prior to Columbus such as Welsh, Vikings or Irish. The case for the latter is strengthened by a 500-year-old report(h) of a long-established Irish colony in North America called Duhare.

America as Atlantis and the source of freemasonry knowledge was recently repackaged in a brief article on the Odyssey website(k) quoting Manly P. Hall who in turn cited Plato and Sir Francis Bacon. It then proceeds to speculate on what lessons the story of this original American Atlantis offers the America of today!