However, it has been noted(i) that the Homeric poems (and the works attributed to Hesiod) studiously avoid any reference to the Aegean Sea, an avoidance that appears all the more striking when juxtaposed with the fact that there are other named seas in the poems. 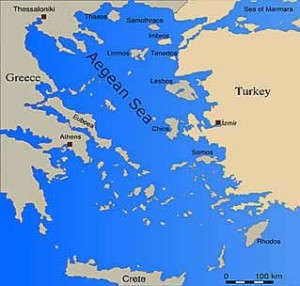 >A half-hearted attempted to link the Greek island of Thasos with Atlantis is to be found on the German de.pluspedia.org website(j).<

(d) https://pseudoastro.wordpress.com/2009/02/01/planet-x-and-2012-the-pole-shift-geographic-spin-axis-explained-and-debunked/ (about half way down page)