A German language website(a) presented some of the following data+, apparently recording the dramatic widening of the Strait of Gibraltar between 400 BC and 400 AD. The same list was included in the ‘Strait of Gibraltar’ entry of the German Wikipedia(b) until a few years ago. It has since been removed.

My list had orignally included Euctemon, the 5th century BC Athenian astronomer, however, Werner E. Friedrich notes that Euctemon was referring to the Sea of Marmara near the entrance to the Black Sea [0695.38]. 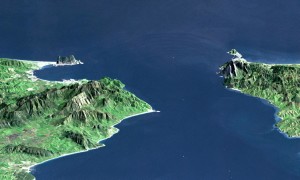 Melqart was the son of El the supreme deity of the Phoenicians. He was the 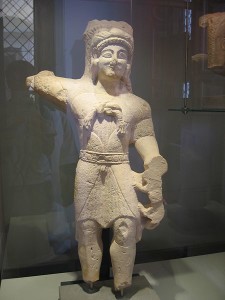 principal god of the city of Tyre and was sometimes known as Baal. As Tyre gained supremacy throughout the Phoenician world, Melqart also gained prominence. Melqart is the only Phoenician god mentioned in the Hebrew Bible. The Temple of Melqart in Tyre was similar to that built for Solomon in Jerusalem. This is understandable as craftsmen from Tyre built the temple in Jerusalem and there would have had a natural exchange of religious ideas, as they were neighbours. Herodotus describes the main entrance to the sanctuary as being flanked by two columns or pillars known as ‘betyls’, one made of gold and the other of ‘smaragdus’— often translated as ‘emerald.’

The cult of Melqart was brought to Carthage, the most successful Tyrian colony, and temples dedicated to Melqart are found in at least three sites in Spain; Gades (modern Cadiz), Ebusus, and Carthago Nova. Near to Gades, at the Strait of Gibraltar, the mountains on either side were first known as the Pillars of Melqart, and then later changed to the Pillars of Heracles. Across the Strait of Gibraltar, at the Atlantic coast of Morocco was the Phoenician colony of Lixus, where there was another temple of Melqart.

In classical literature, Melqart and Heracles have been referred to interchangeably, by many historians such as Josephus Flavius.

It is thought that the city of Cadiz was originally founded as Gadir (walled city) by the Phoenicians around 1100 BC, although hard evidence does not prove a date earlier than the 9th century BC. In his 2011 book, Ancient Phoenicia, Mark Woolmer has claimed [1053.46] that the archaeological evidence indicates a date around the middle of the 8th century BC.

It is regarded as the most ancient functioning city in Western Europe. Gadir had a temple that was dedicated to the Phoenician god Melqart. Some consider that the columns of this temple were the origin of the reference of the Columns of Heracles. Commentators on Plato’s Atlantis story have linked Cadiz (formerly Gades) with the second son of Poseidon, Gadirus.

Richard Hennig (1874-1951) was a German student of ancient geography. He drew on the work of Adolf Schulten and Otto Jessen to support his conviction that the Scheria referred to by Homer was in fact Atlantis. Hennig drew up a list of similarities between the two[613] but as N. Zhirov remarked, an equally long list of discrepancies could be compiled leaving the question still open.

In 1925, Hennig argued forcefully that Atlantis had controlled Cádiz in Spain where Tartessos was located. He claimed to have demonstrated that the Atlantean kingdom of Gadeirus controlled Atlantic Spain during pre-Classical times.

Hennig also saw similarities between Atlantis and Tartessos and believed that the Greeks of Plato’s era thought of Tartessos as having disappeared no more than a hundred years earlier. This idea would have placed the demise of Tartessos/Atlantis around 500 BC, in other words after Solon’s visit to Egypt!

Cádiz is the modern name for ancient Gades considered the original kingdom of Gadeirus the twin brother of Atlas. However, the certainty normally associated with this accepted identification is weakened by the fact that quite a number of locations with similar sounding names are to be found in the Central and Western Mediterranean regions.

The Spanish historian, Adolfo Valencia wrote a history of Cádiz[0208],  in which he suggested that Atlantis might have extended all the way from Cádiz to Malta.

It is generally accepted that the Phoenicians from Tyre founded Gadir, later to be known as Gades to the Romans. The Roman historian, Velleius Paterculus (c.19 BC – c.31 AD) wrote that Cadiz was founded 80 years after the Trojan War, circa 1100 BC. In the 9th century BC, the Phoenicians, under Princess Dido, founded a new capital at Carthage in North Africa. At Gades the Phoenicians/Carthaginians built a temple to Melqart that had two columns that many consider to be the original Pillars of Hercules. In 2007, it was announced that excavations in the old town centre produced shards of Phoenician pottery and walls dated to the 8th century BC, probably making it the oldest inhabited city in Europe.

Gades is the Roman name of what is generally accepted as having been located at or near modern Cadiz in southern Spain. In his Critias Plato relates that the twin brother of Atlas, the first ruler of Atlantis, was named Gadeiros although known in Greek as Eumelos. It is assumed that he had his realm in the vicinity of Cadiz and had his capital named, Gadeira, after him.

However it has been pointed out that the Phoenicians who, before the time of Plato, possessed a port city in southwest Spain named Gadir meaning ‘enclosure’ or ‘fortress’ and was, over time, corrupted to Cadiz.

Until recently it was generally accepted, based on classical writers including the historian Livy, that the Phoenicians founded Gades around 1100 BC. Writers today such as Mark Woolmer have pointed out [1053.46] that the archaeological evidence suggests a more recent date, perhaps the middle of the 8th century BC.

However, a number of locations with similar sounding names are to be found in the Central and Western Mediterranean region, weakening the certainty normally associated with the more generally accepted identification of Gadeirus’ city with South-West Spain.

Another solution has recently been proposed by the late Michael Hübner, in which he offers the Souss-Massa plain of Southern Morocco as the location of Atlantis. On the Atlantic coast of the plain is the large town of Agadir, whose name is also probably derived from the word ‘gadir’ which means fort or enclosure in the local Tamazight language. It can also mean ‘sheep fold’, which may tie in with Plato’s use of ‘Eumelos’ as the Greek translation of Gadeiros means ‘rich in sheep’.

Alternative suggestions have been proposed, including one by Andis Kaulins(a), who is inclined to identify the islands of Egadi (Aegadian), off the west coast of Sicily, which is opposite today’s Tunis. Should this Egadi be the original Gades it would make sense of two of the suggested alternatives for the location of the Pillars of Heracles, either the Strait of Messina or the Strait of Sicily, where there is a Gadir on the island of Pantelleria(b). It would mean that Egadi would have been outside the Pillars of Heracles from either an Athenian or Egyptian perspective. Albert Nikas has pointed out the existence of a place in Malta called Il Ghadira, which has the largest sandy beach on the island!

A number of investigators have also identified Gades with Tartessos, presumed to be the Tarshish of the Bible.

More recently Jonathan Northcote has suggested that Gadeira may have been Ireland, citing Strabo, who quoted Eratosthenes, who had noted that Gades is five days sailing from the ‘Sacred Promontory’. Wikipedia lists(d) eleven promontories stretching from Crimea to Wales that have been so named, but noting that these were only some of the locations given that designation. So he arbitrarily chose either of the two Portuguese Capes listed as the most likely starting point for a five-day journey to Ireland (Gadeira)!

Stuart L. Harris has echoed this, employing linguistic gymnastics(c). He uses Felice Vinci‘s idea that Homeric Greek was in fact a form of Finnish and so Gadeira was Käde Eiran, meaning ‘Hand of Eira’, supposedly a variant of Éire (Ireland) and consequently Atlantis lay to the west of Ireland. Convoluted, is an understatement.